This page is in the process of being re-written from scratch. To see the previous content, almost all of which is several years out of date, please see User:Acronis2/Sandbox.

The sapient species of Urth are:

Humanoids are beings with human form or characteristics. Beings classified under this term possess similar general bone structure with one another, differing almost exclusively by minor external features.

Humans are by far the most populous species on Urth, as well as the most widely distributed. Humans reside on every continent on Urth except Sempiterna and can live in almost any biome. Humans are believed to have originally evolved in Arcturia, but had spread to all continents on the planet before the advent of written history. Humans exhibit a wide variety of skin pigmentation, hair texture, hair color, eye color, and other physical features. Skin pigmentation is primarily a factor of exposure to the Sun. Humans typically live between 60 and 90 years long, and average just under six feet tall for all genders.

Elves are humanoids that are believed to share the most recent common ancestor with humans of any sapient species on Urth, and appear largely identical to humans except for their characteristic pointed ears. Elves are also taller on average than humans, and while elves across Urth exhibit large variation in lifespans, a key identifier of elves is their longer natural life span than humans. Tavari elves, on the lower end of the spectrum, tend to live an average of 100 years. On the other end of the spectrum, Banto-Shamsian elves live an average of 170 years, and Usprian elves can expect to live 200 years or more. Like humans, elves exist on all continents except for Sempiterna, and they demonstrate variety in external features like skin pigmentation or hair color. Elves are believed to have originally evolved in central or western Yasteria.

Chibian Elves are native to Northeastern Gondwana, believed to have settled around the lakes Nyo and Leopold. They have pointy ears and a brownish muddy skin pigmentation alongside a tendency towards darker hair. They are noticeably shorter than most elves, averaging just below the average human, however they are notable for their Rhodopsin, which grants them a considerably better level of night vision than other elves. Their lifespans average to around 90 to 95, though it is argued this is due most to societal factors rather than a natural trait,

Kromma Elves, also known as Krommosantic Elves are native to Alva and Western Yasteria. They bear notably shorter ears and are generally tall yet hardy, living on average 168 years, though not uncommon for some to reach into the 210s. They are generally of fair skin and generally posses a low amount of melanin in their eyes, increasing the commonality of blue, green or grey irises.

Usprian elves, native to regions of Aurora that are today part of Valeria, Rosalica, and Valerica, are largely similar in physical features to other groups of elves, but have vastly extended lifespans. The average lifespan is around 200 with the longest recorded lifespan being with (enter name here) who lived to the age of 243 from 1775 to 2018. Gene mutations linked to DNA repair that increased resistance to aging and cancer as being responsible for Usprian elves longer lifespans. Reproduction also occurs at a remarkably slow pace with couples only able to have children every 60 to 70 years, allowing for couples to have at most two children, rarely three. Usprian elves, along with Z'rei elves, have tetrachromatic vision which gives them a greater depth of color perception and at times allows their vision to dip into the ultraviolet range. Although they have the ability of long life, Usprian elves are also considered to be less durable physically compared to other species of Urth. Usprian elves tend to be more prone to physical injuries and at times more vulnerable to diseases and illnesses. Along with their slow reproduction and rapid reduction in population following the conquering of Valeria by the Kingdom of Staynes in the 13th century, a significantly small population of Usprian elves now make up a portion of the remaining indigenous groups of elves on Aurora.

Z'rei elves, native to Borea, exhibit skin pigmentation that is literally black, and often hair that is white.

Azral (Kæzhyn: Az'ra) elves, which can be found only scarcely in North-eastern Borea, predominantly in Kæra'zna, are the result of the selective breeding done between Z'rei elves and a now wiped out elven subspecies. While many categorize them as Z'rei, they bear much more greyish skin pigmentation and hair, as well as an extended lifespan averaging around 129 years. They notably still do posses the tetrachromatic vision found in their Z'rei relatives as well as the Usprian Elves.

Dwarves are humanoids with short stature thought to be originated from central Novaris. Averaging a height of four feet, dwarves are shorter than most species on Urth due to their curved spine. Their limbs, compared to other humanoids, are shorter. The same can be observed with their fingers. Their knees and elbows more constrictive, resulting in poorly mobile elbows and bowed legs. Their heads are larger, displaying a larger and higher forehead and flatter nose bridge. Regardless of sex, facial hair grow more rapidly with some dwarven men regrowing shaved beards just under a few days. Despite their stature, dwarves are naturally stronger than their fellow humanoids. Dwarves are able to lift thrice their weight even without exercise. Along with this, dwarves are armed with incredibly long memory.

Nekomimi are humanoids that feature triangular ears at the top of their heads, similar in shape and expressional ability to those of domestic cats. These are in addition to ears on the sides of their head that are identical to those of humans. They also have cat-like tails. Their cat-like features are an example of convergent evolution, as nekomimi are offshoots of a recent common ancestor with humans and not genetically related to Felines. They are believed to have originally evolved in the islands far to the east of Novaris after a period of isolation from other populations, in particular the island that is today 1 Infinite Loop. Nekomimi populations are known to have migrated to South East Yasteria in antiquity, and today are found elsewhere in generally small, scattered populations on every inhabited continent.

Orcs are humanoids, native to Gondwana but now found on all inhabited continents, featuring green skin, large tusks on the lower mandible, and distinct musculature and a large stature. They share a genus with Tieflings, and are capable of reproducing with Tieflings and Elves. Orcs are, on average, the largest and most massive members of the hominid species group. They are documented in the fossil record as early as 450,000 years before the present; the fossil record indicates that they had expanded beyond Gondwana approximately 200,000 years ago. In addition to generally being larger in size than other species, Orcs are known for having a relatively lower life expectancy (approximately 70 years) due in large part to complications related to child birth. 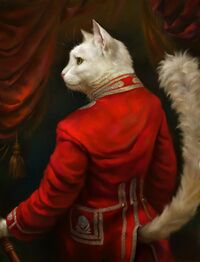 First Felid Sultan of Packilvania, Amhoud I, he is a Shirazi feline, known for their short snouts.

Lupines are a species of large, bipedal canines native to Itur that share a common ancestor with wolves. One of the larger sapient species on Urth, they generally range from 5 ft 10 in (177 cm) to 7 ft 10 in (238 cm). Males average 6 ft 8 in (203 cm) and females 6 ft 3 in (190 cm). Shrinkage of stature may begin in middle age in some individuals but is usually typical in those of advanced age. Males weigh on average 205 lb (93 kg) and females 175 lb (79 kg). Like many conditions, body type and body weight are influenced by both genetics and environment and varies greatly among individuals.

There are several key differences between lupines and their wolf cousins. Lupines evolved to be plantigrade and its molars have a flatter chewing surface, allowing lupines to eat more vegetable matter. They also possess humanlike hands and a thumb as opposed to paws at the end of their arms. The brain size of a lupine is also significantly larger than a wolf’s. They retain several features of their ancestors, including slightly pointed, triangular ears, a muzzle, and a long tail that averages 1.25 feet (40 cm). Lupines can have a wide variety of fur color ranging from pure white to black, but typically are mottled white, brown, gray, and black.

Lupines will typically live between 60 and 75 years old, with the worldwide average at 68.5 years old for males and 73 years for females. Individuals will often attain ages of 80 years and above in developed nations, but it is much rarer for an individual to reach ages above 90 years old. 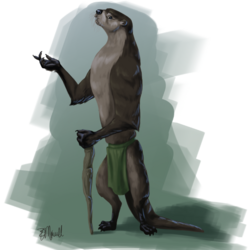 Lutrynes are a species of anthropomorphic humanoids with many recognizable otter-like features and characteristics. Larger than their more primitive counterparts, lutrynes in general have similar fur markings, with brown, black, and white patterns being the most prominent. Their bodies consist of a larger brain capable of more precise and faster execution, when compared to their quadripedal counterpart. The lutryne body is considered rather thin and sleek, a result of their aquatic-based ancestry. Most lutrynes inhabit the region of southwest Gondwana and the southern Pacific Ocean, and other areas in proximity. Lutrynes are believed to have evolved in this region. The race is regarded as generally fast and agile in aquatic environments, with their species typically maintaining a relatively thin layer of fat and a very dense layer of fur. Outside of the water, the lutryne body underperforms, yet still retains its ability to stand upright, walk, and run, among other things. Maintaining an average height of around 5 feet, and weighing in around 120 pounds, Lutrynes are relatively small compared to humans. Lutryne body proportions are almost identical to human proportions by a scale of 3:4. The senses of the species are, for the most part, superior to humans, with the exception being hearing, which was evolutionarily less important than sight and smell.

Retrieved from "https://tep.wiki/w/index.php?title=Species&oldid=39941"
Category:
Cookies help us deliver our services. By using our services, you agree to our use of cookies.