The vulpine sentient race is a specific group of anthropomorphic humanoids with many recognizable "fox" features and characteristics. While not as furry as their animal counterpart, vulpines do in general have similar fur markings, with red and white being the most popular colors. Their bodies consist of a larger brain capable of more precise and faster execution. Senses are heightened. The vulpine body is agile, allowing for good dexterity.

The race is regarded as "thin", as their bodies lack a subcutaneous layer common among humans and humanoid species. This can serve as a determent for adapting to different climates. Furthermore, vulpines tend to lack physical strength due to their small frames. Life expectancy is less than that of an average human.

Vulpine creatures tend to represent a fairly equal blend of human and fox-like characteristics. The typical vulpine male stands at about 5'3" to 5'8", weighs between 110-160 lbs, and appears wiry in stature. Vulpine females are noticeably smaller, standing between 4'8" to 5'2", weighing between 70-115 lbs, and also have a wiry stature. Responsible for their thin frames is the lack of a subcutaneous layer many hairless mammals enjoy. This lack of a layer of fat makes them far more susceptible to extreme changes in climate.

At a first glance, these creatures appear to have slightly disproportionate heads, as their skulls house a formidable brain, which makes them very adapt at problem solving skills and memory retention. To go with their larger brain are large eyes, capable of seeing well under low-light visibility. Large, triangular-shaped ears give them four to five times the hearing prowess of a human. These ears are capable of responding to sounds around them (by twisting or moving) or emotions: often when the creature is depressed, the ears will sink downward, and when angry, they may bend back slightly. Their sense of smell is roughly three times as strong as the common human being, but is more able to discern between smells than actually determine if the smell is "good" or "bad". Their mouths display an array of 42 teeth - more canines than molars - and contain a tongue that is slightly dulled compared to that of the human tongue. Hair, typically black, grows on their heads, and is different from their fur in texture, density, and length.

The fur of a vulpine sentient is typically short, ranging in length from 0.2 - 1 inches in length. Southern variants have shorter fur than northern variants. Legs and arms tend to have the longest fur, while eyelids and fingers tend to have the shortest fur. A vulpine's fur color may vary, even in its own family unit. Colors are determined genetically by different traits carried by both parents. Even recessive traits can mix to form different colors. The typical fur markings seem to be red with white (and sometimes black) minor, gray with white minor, blue with white minor, and all white.

The vulpine sentient is equipped with two hands of four fingers and one thumb. Their extremities are often bony appearance, again due to the lack of a subcutaneous layer. Still, their digits are highly dexterous, capable of complex intricate motion necessary for accomplishing difficult tasks. Feet tend to be long and slim, having enough area to support their upright structures.

Tails are generally anywhere from 2 - 2.5 feet long on the common adult vulpine. Here, the fur grows much longer, having an average length of around six inches. If the fur markings include a minor color, the minor color is typically placed directly on the tip of the tail.

Advantages and Disadvantages of the Vulpine Anatomy

The vulpine form is very sleek and nimble. Consequently, the vulpine body is perfectly equipped for acrobatic feats as well as movements which require high amounts of dexterity. Activities such as climbing, running, and swimming (especially in the southern variant type) are preferred over actions which require raw strength, something the vulpine form is not designed for. Vulpines are fairly well-known for their swimming abilities.

Vulpine bodies are unable to gain substantial amounts of weight. This is due to their lack of a layer of fat, but structurally, their bodies are not designed to support a large amount of weight. This is a direct consequence of their skeletal structures, which are thinner than that of a healthy human being of the same age. Consequently, their physical brawn is lacking.

The vulpine race is susceptible to many diseases, but some are only exclusive to their race. Yellow Plague is a very deadly ailment that affects first the respiratory system, then affects the rest of the important body organs. It often appears with very little symptoms at first - normal cold-like ailments appear first, then the presence of a very viscous yellow fluid is discharged from the throat during coughing. The disease can be foodborne or airborne if the right conditions are met.

The Vulpine Body and Vulpine Culture

It is quite common for vulpine males and females to alter their bodies, as their cultures have welcomed such practices throughout the ages. Tattoos and piercings are common and often hold significance, especially for religious purposes (such as vulpine paganism early on, or Vayan Catholicism once the majority of the species converted in the Vekaiyun-Listonian lowlands). Special circumstances may cause a vulpine to dye its own fur. This is especially true in early Vekaiyunculture, in which vulpine men and women would dye their fur black to mourn the loss of a loved one. Vulpines may also dye their fur for weddings, first communions, and life-changing events. Recently, for someclub scenes, vulpine teenagers have been seen dying their fur different colors.

Tails are generally works of art. They may be dyed different colors, have piercings, or be painted with holy symbols.

The Vulpine Definition of Beauty

Many common traits of beauty from humans are passed down to the vulpine race: symmetry, hygiene, a youthful appearance, and bodies capable of reproducing. However, there exists additional features which tend to further separate the vulpine masses. Very large eyes are something to be desired of in most vulpine societies, with precedence given to crystal blue eyes. Green eyes are rare and are often revered as mystical. A short muzzle combined with large ears is also desirable. Vulpine people prefer long tails, though some have their tails cut off for job purposes or athletics.

Northern variant vulpine cultures are very particular about the condition of their fur. They are diligent about keeping their fur clean of dirt, mats, and grime. While they are not vain, their fur is very important to them. Those with tails will brush them until their tails have a satin-like appearance. Some see their bodies, especially ther furs, as works of art and will take the time to take care of their bodies. Hygene is important in southern variant species, but shorter fur is viewed as easier to maintain. 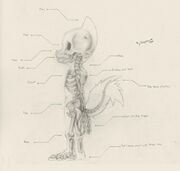 Young vulpine males and females do not reach sexual maturity capable of reproduction until about thirteen years of age. Nevertheless, when a vulpine female becomes pregnant, she will wait an average of seven months before the child, called a kit, is delivered. Typically, this produces just one child, as twins and pairings thereafter are relatively rare. When born, the kit is blind and helpless. It is not until the second week that the kit will open its eyes and begin to explore its surroundings. Teeth grow towards the end of the third month, and the kit will normally stand by six months.

As a general rule, birth defects are rare. If a defect does occur, it often is on the tail. In rare instances, a tail-less kit may be born, or a kit with more than one tail may also be born. Generally, this is not received well in vulpine culture, however.

At around age 40, the vulpine body begins to deteriorate. The strong heart muscles needed to pump blood to their bodies begin to weaken, and the appearance of wrinkles and other signs of old age start to appear. Smaller frames, a heart that appears to weaken with age, and the lack of a subcutaneous layer work against the vulpine race, which contributes to a decreased life expectancy.

Vulpine people are generally distrusting of other races when compared to their own. The vulpine race is perceived as a sort of "over family" in which everyone in the species is considered a member of. They absolutely despise being referred to as animals, as they believe they are at least equal to that of a human being. Vulpine cultures will often champion themselves as protectors of "lesser" species; that is, species with smaller populations.

A reconstruction of "Fesali's Tools"

There is no concrete proof of vulpine evolution, but some theories hold high esteem. One such belief posits that millions of years ago, the Vekaiyun-Listonian lowlands formed a basin that was highly susceptible to severe flooding and drought. The reasoning behind these tumultuous weather patterns is unclear, but rock formations found in and around the lowlands support this theory. Because of this tumultuous habitat, the creatures trapped within this basin were forced to develop problem solving skills at a rapid rate. Those which did not perished, and natural selection was intensified. It is believed vulpines were among the first to walk in a bipedal fashion, which probably rose from the necessity to reach vegetation and other animals from the tops of trees in addition to the need for capable hands to use tools and grab certain objects.

To date, no evidence of a vulpine-fox hybrid has ever been found. The only tangible proof seems to come from an obscure collection of tools found in a bog outside of Iruk, Vekaiyu. Named "Fesali's Tools" after the discoverer, Vinsent Fesali, a farmer, a sharp stone was found next to some string, and another was found next to a heavily eroded stick. The exact date has proven a challenge, but carbon-12 dating has determined the horsehair string attached to one of the rocks to be fifty to one hundred million years old. It is the belief that the sentient being that created it was capable of fashioning intricate tools, killing animals larger than itself (judging by the small grips on one stick), and had dexterous hands that required walking on two legs.

According to the Unified Bipedalism Theory, Vulpines belong to the Bipedaliforma suborder. This theory states that Proto-Bipedaliform was their ancestor who was fully sentient. Their descendents diverged into the Ambidactyliforma group which had opposable thumbs and outcompeted the Unidactyliforma. Some Ambidactyliforma split of into the Plantigradidae. Those that continued waking on their toes were grouped into the Digitigradidae. They split off into the Lycaniform and Gatiform groups. The Lycaniform group is believed to contain the genera Alepis and Lycanis. Whereas the Lupines belong to Lycanis, the Vulpines are believed to belong to Alepis alepis.

Retrieved from "https://tep.wiki/w/index.php?title=Vulpine&oldid=49051"
Categories:
Cookies help us deliver our services. By using our services, you agree to our use of cookies.