The Grand Duchy of Nagato, commonly known as Nagato, or sometimes the Nagato Grand Duchy, or abbreviated as NGD, is a sovereign country located in the middle of the Sea of Gondwana on Urth. The only land border is in eastern Nagato with the United Order Republic to the south. With an area of 474,326.3148 km2 (183,138.4139 sq mi), Nagato is the 11th largest country on Gondwana and the 45th largest country on Urth. As of 2020, Nagato has a population of 34,021,230, an estimated increase of 1.6% from 2010. Codexian and Genesi make up the majority of the languages spoken. The population is mainly Nagatoian, followed by the native Genesi, and other nationalities. The capital and the largest city by area and population is Greenwood.

The Genesi people first migrated to East Unovia Island and West Unovia Island from western Gondwana sometime in the late 15th century. The Proto-Nagatoians, at this time, settled on the northern part of Unovia Island The Nagatoians would end up establishing the Kingdom of Nagato in 1700. In 1720, the two cultures would meet each other when a Nagatoian sailed to current-day New Bridgeport and traded with the locals.

The name Nagato comes from the Genesi word for “eternity, long, and lengthy”. This later included the term “long life” to describe the nation for having a long existence throughout history. The first use of Nagato was used to describe the people of the region who opposed Augustia’s rule.

The land that would become Nagato was the territory of Augustia. In 1559, the first name of the region was called the Western Augustian Territory, but in 1579 after several years of marketing and protests, the government renamed it to better reflect the people of the region as the Nagatoian Territory of Augustia. Most of the Nagatoians of the time lived on the northern part of Unovia Island, while North, East, and West Unovia Islands were not explored all that much until the early 1600s by the Nagatoians.

Main articles: History of Nagato and Indigenous peoples in Nagato

The oldest traces of life in what is now Nagato date back approximately 1.6 million years ago with early felines. Over the ensuing millennia, felines were confronted by a harsh and variable climate, marked by several glacial periods. Early felines led a nomadic hunter-gatherer life. Nagato has a large number of decorated caves from the mid-Stone Age, including one of the most famous and best-preserved, Yamoto Caves (approximately 23,000 BCE). During the last glacial period (approximately 19,650 BCE), Chargestone Supervolcano erupted with a Volcanic Explosivity Index of 8. The eruption was so devastating that it blocked out the sun around the world for almost a decade and possibly a 1,000-year-long cooling episode. This has led to the Chargestone catastrophic theory that due to the eruption, it caused a population bottleneck in 95.7% of all life on Urth and acted as a “soft reset”.

Around 18,485 BCE, humans began to arrive in Nagato from what would later be known as Augustia and Vessarlian in the east. This migration is thought to have happened due to other species invading or in search of warmer water. Since there wasn’t a dominant species in Nagato, human settlement began without any conflict from outside sources.

At the end of the last glacial period (9,000 BCE), the climate became milder. As the center of Gondwana was filling up with water from glacial melt, the land started to shrink to present-day coastlines. Around 7,000 BCE, Central Gondwana entered the Neolithic era and its inhabitants became sedentary. After strong demographic and agricultural development between the 4th and 3rd millennia, metallurgy appeared at the end of the 3rd millennium, initially working with copper and bronze, as well as later iron. Nagato has numerous megalithic sites from the Neolithic period, including the exceptionally dense Tokor stones site (approximately 3,300 BCE). Around this time diamonds were first discovered deep in the cliffs of Chargestone Caldera. Early humans used diamonds for worship and to decorate themselves for style and power.

The Genesi were very adventurous during the 1700s and into the early-1800s. The Genesi visited many places around the Sea of Gondwana and brought back books, instruments, new elements like Iron and Oil, and tons of food. It is said that the Genesi people started their Industrial Revolution in 1745 with the introduction of the first wind turbine in New Bridgeport, the first true city, to help with harvesting crops.

Sometime during the late-1700s, two natives were digging into a cave south of current-day New Bridgeport when they noticed a shiny mineral in the cave wall. They told the top scientist at the time, Wene Le, about what they found. To Le’s surprise, it was Silicon. Le ordered a full recovery of all Silicon and whatever they might find in that cave. While in the cave, Lithium was found alongside many precious metals like Diamonds and Emeralds. The Genesi would later use these newfound elements and metals to boost the economy for many decades to come. By 1900, the Genesi economy was growing rapidly.

Nagato is made up of 25 islands, the most populated is East Unovia Island and the largest is Unovia Island. Unovia Island, however, is also shared by the United Order Republic.

East Unovia Island, as well as North and West Unovia Islands are part of the Genesi Archipelago, which was formed by volcanic activity initiated at an undersea magma source called the Unovia Hotspot. The process is continuing to build islands; the tectonic plate beneath much of the Unovia Sea continually moves southwest and the hot spot remains stationary, slowly creating new volcanoes. Mount Coronet, a volcano on Ryouko Island, is the tallest mountain in Nagato at 5,683 meters (18,645 feet) tall. Chargestone Caldera, located on East Unovia Island, southeast of New Bridgeport, Nagato, is the site of the last supervolcanic eruption in Gondwana (approximately 19,650 BCE) with a Volcanic Explosivity Index of 8.

During the last glacial period (approximately 19,650 BCE), Chargestone Supervolcano erupted with a Volcanic Explosivity Index of 8. The eruption was so devastating that it blocked out the sun around the world for almost a decade and possibly a 1,000-year-long cooling episode. This has led to the Chargestone catastrophic theory that due to the eruption, it caused a population bottleneck in 95.7% of all life on Urth and acted as a “soft reset”.

According to the Köppen climate classification, most of Nagato has a temperate oceanic climate (or Do type), which features warm summers, and wet winters with frequent overcast and cloudy skies. Many laws strictly forbid damaging natural habitats, keeping most beaches in the country's natural state, all the while attracting many tourists. Eco-tourism is highly encouraged by the government, with most hotels opting for a healthy mix of nature and the enjoyment of their guests.

Main articles: Fauna of Nagato and Flora of Nagato

Main articles: Nagatoians, Demographics of Nagato, Race and ethnicity in Nagato, and Family structure in Nagato 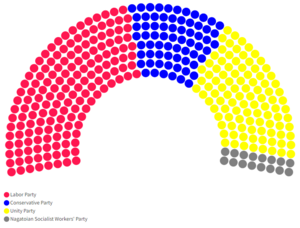 The National Council after the 2020 Nagato General Election 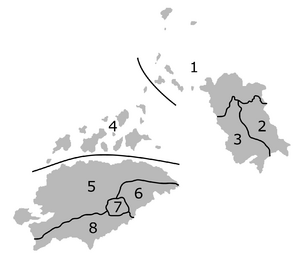 Nagato is a semi-urbanized country, with most of its cities within 80 km (50 miles) from any body of water. Greenwood is notable for being the only city in the top ten largest in population that is located inland, compared to the other top ten.

The Intercontinental Regional Security Accords is headquartered in Greenwood.

Main articles: Science and technology in Nagato and Science policy of Nagato 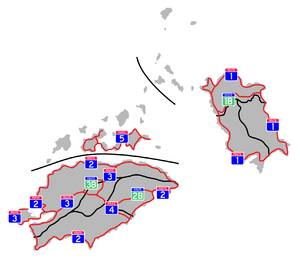 The Highway System of Nagato is signed with a white border, the top one-third is in Ruby Red and displays the word “NAGATO”, while the bottom two-thirds is in Sapphire Blue and displays the number of the highway. Auxiliary highways, however, are signed with the bottom two-thirds is in Emerald Green and display the number of the highway followed by a “B” to indicate it’s a byway. All highways are fully controlled-access routes built to the same standards as other highways like it worldwide.

Further information: Media of Nagato
See also: Newspapers in Nagato, Television in Nagato, Internet in Nagato, Radio in Nagato, List of Nagato magazines, and Video games in Nagato
Retrieved from "https://tep.wiki/w/index.php?title=Nagato&oldid=43216"
Categories:
Hidden categories:
Cookies help us deliver our services. By using our services, you agree to our use of cookies.