Porta Armada is the largest city on the southern coast of Antora. The capital city of the district of Castijara, Porta Armada is the oldest continuously inhabited city in the region, having been the first major settlement founded by Impelanzan colonists in the late third century CE. The city proper only covers around 15 kilometers squared, but its many separated districts and metropolitan area cover around 1,201 square kilometers with a total population of 906,416 people. This puts the city and its metropolitan area at fifth largest in the country for area, fourth for population. The ideal natural harbor and wave break have made Porta Armada a hub for naval activity and shipping since its foundation. The city was the capital of the Kingdom of Liti from 578 to 1249 CE, Porta Armada would be integrated into the larger Kingdom of Casilló as the center of power for the Duchy of Liti, of which it still serves today. The Dukes of Liti have historically been the most nautical-minded of the Arranzic lordships, with many serving as officers in the Royal Antoran Armada starting in the 1700s. Today Porta Armada is home to the Porta Armada Naval Base and the shipyards of Arsenale Corric, and serves as the berth for 25 AAR warships.

The unique tidal geography of the southern coast means that the city of Porta Armada is actually comprised of five urban districts around the Litic Lagoon. The districts of Porta Centra, Porta Oeste, Porta Norte, Porta Este, and Porta Sur are functionally all self-contained cities, each with its own emergency services, municipal council, and public services. Due to the inextricable economic and military functions of the metro region, each district remains subordinate to the City Council of Porta Centra, the oldest district. Porta Armada is home to the southern branch of the Antoran Maritime Port Authority, the Armada International Airport, the Royal Antoran Tourism Board, the Castijara Assembly, and the FDAR Command Armada South. The city has a rich cultural history, with a large tourism draw to its architectural landmarks, nightlife, cruise ship terminal, and beaches. 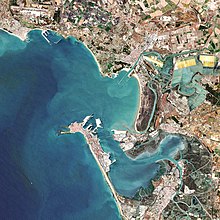 A satellite view of the Porta Armada Metropolitan Area

Retrieved from "https://tep.wiki/w/index.php?title=Porta_Armada&oldid=51511"
Categories:
Hidden category:
Cookies help us deliver our services. By using our services, you agree to our use of cookies.