Descarai is the largest city in the district of Cartevedra, Antora. It has a population of 470,623 in city limits and a metro population of 780,556. The city covers 68 square kilometers while the metro area covers 870 square kilometers. It is part of the Duchy of Réginatra, and comprises the entirety of the County of Descarai. Located in the foothills of the Rezores mountains in north-west Antora, Descarai serves as the economic hub for the Cartevedra district. It is home to the Cartevedra Assembly, the district legislature, as well as the North Antora Economic Board and the Antoran Royal Heritage Office. Descarai was founded in the 13th century as the new royal town for the Kingdom of the Valay de Rayal, later the Kingdom of Réal. The Carratéo queens and kings built several castles in the area and held court here, over time ruling directly over the second-largest city in central Antora after Eleçeron. The city lost prominence after the Thirty Years Bloodshed of 1550-1585 which saw Réal conquered by neighboring Casilló, with many government functions for the combined kingdoms being moved to Eleçeron and Porta Tranquíla. In the late 1800s, the area underwent a revival, with scholars and artisans flocking to Descarai as a new center of Antoran culture.

The city hosts many architectural landmarks, including the former Réoran capital district of Queen's Town, the palatial Castle Réal, and the River Market along the Río Buviele, which divides the city in two. Modern architecture is mostly relegated to the outlying districts, but is becoming much more popular as the city undergoes another contemporary revival. Descarai is considered the capital of the fine Antoran arts, boasting seven full-size dance stages, five opera and music halls, and the sub-city of Opelutra, the center of the Antoran cinema industry. The area is also home to the largest military population outside of established bases and Porta Armada. The Descarai Combat Academy, the largest military education facility in the country, and the General Staff Headquarters of the Royal Antoran Defense Forces, built on the foundations of an 18th-century fort, attract a semi-permanent military population of nearly 20,000. The name Descarai has become synonymous with both the fine arts scene and the military command, depending on context. 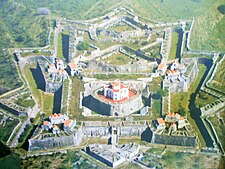 Retrieved from "https://tep.wiki/w/index.php?title=Descarai&oldid=49879"
Categories:
Hidden category:
Cookies help us deliver our services. By using our services, you agree to our use of cookies.