The Grand Republic of Tuvaltastan, commonly known as Tuvaltastan, is a nation that exists on the continent Aurora that has a border with Xiopothos, Volova, Great Morstaybishlia, Nolova, Thalria, Faethalria, Nilovia, and exists directly north of the island nation of Dragonia. The nation, with a Nominal GDP per capita of $27,643, has an estimated population of 27,802,894 as of 2020. Tuvaltastan encompasses the three southernmost major Auroran Lakes, those being Slovi Lake, Orts'ilovi Lake, and the northern half of Lake Nilovi, in order from west to east. The nation follows the southern coast of the continent, with Nilovia splitting the coasts into two sections: The East Coast and The South Coast. Tuvaltastan also has dominion over a number of islands, those being divided amongst the subdivisions of The East Crescent Isles, Avutili, The Far East Isles, Absurdvani, and Kemeshovi. The largest city Shagonar holds an estimated 4,627,134 individuals and the capital Akhalibisi holds another 3,122,776. Shagonar and the fifth largest city Kar'topi are both part of the Shagonar-Chilekani-Kar'topi Area (often referred to as Shachika), and hold a population of nearly 11 million people. The center of the nation, namely the Akhlos P’reria and Shoreuli P’reria provinces, make up the majority of croplands within the country, making up __% of the nation's total consumption.

Tuvaltastan is one of a number of nations once part of the former nation of Salovia, and that distinction has greatly affected its role on the world stage since the nation's founding in 2005. After the Salovian Civil War ended, the Treaty of Astravili officially established Tuvaltastan, Baykalia, and the former nation of Kostromastan. Unlike its counterparts, Tuvaltastan is widely considered to be the spiritual and political successor to Salovia, as it is the largest in terms of land area, military strength, and GDP, and has the former Salovian capital Akhalibisi as its own capital. This de facto succession placed the former Salovian colony Komertsiya Port (located in Gondwana) under its de facto jurisdiction from 2005 until 2010, then official jurisdiction from 2010 to the 2020 Komertsiya Handover Ceremony, in which the city was returned to Ayaupia after 180 years of Salovian and Tuvalt rule. Tuvaltastan has replaced Salovia in a number of international organizations, including the East Pacific Treaty Organization, the Cooperative for East Auroran Nations, and the International Forum among others. Unlike Salovia, Tuvaltastan is a member of the United Nations of the Auroran Continent, and has been a member since its founding in 2017.

The name "Tuvaltastan," widely used in both the Stanosphere and Codosphere is a Staynification of the native name "Sat’uvaalt’asvelo", a portmandeau of the two primary Salovian provinces that made up the general area in which the nation presides; T’uva and Alt'a. A direct translation of the native name is "Land of the Tuva-Alta People," which is the origin of the Staynified name as well.

Initially used predominantly by the people of Packilvania, the suffix -stan made its way into the Staynish lexicon during the Morstaybishlian-Packilvanion Union in 1897, and came to be used to refer to the nations of both Kostromastan and Tuvaltastan.

In modern terms, "Tuva" refers to the region of Tuvaltastan east of the Tervil mountain range lining the west coast of Lake Nilovi, and is believed to be directly related to the name for the native people who inhabited the region prior to Salovian migration, known as the Tervians.

"Alta," like "Tuva," refers to a sub-national region of Tuvaltastan; the desert region that stretches from the city of Crescent on the border with Xiopothos, over to the vertical city of Tula. Alta is believed to be related to either the Salovian word for highlands (maghalmti) or the Aluvtik River, a tributary to the larger Xinskal River.

In an effort to re-assert control over the southwestern Pacific region, the Tuvalt military began efforts to regain control over the former Salovian region of Avutili, under control of the fledgling Kingdom of Avutili at the time. The military of Tuvaltastan was officially given approval by the Zedakhli to begin operations in early 2013. Much of the world condemned Tuvaltastan's actions, calling the invasion a blatant violation of the self-determination of the Avut people. The natives of the island utilized guerrilla war tactics against the Tuvalt military, who had never stepped foot on the Avut Island. The native Avuti had been successful at keeping the Tuvalt Government in the northern half of the island, until December 3rd, 2016, when reinforcements moved to the island from the south and began surrounding the natives, eventually capturing the entire archipelago for Tuvaltastan. A few weeks later, the Tuvalt government also moved towards the two other former Salovian archipelagos, The East Crescent Isles and the Far East Isles. The Far East Isles are the habitat of the white-tailed Dragonhawk, an endangered subspecies of the Dragonhawk. As such, the general Tuvalt public called for the islands to be converted into a nature reserve. In response, the Tuvalt government enacted a bill to create the Far East National Park and Nature Reserve.

Plans have been in place to turn the Crescent Isles into a commercial and business hub, and for the southernmost island of the Avut Isles into a military facility. After being integrated into Tuvalt society, the native Avuts have been protesting, calling for more rights to their land. A bill was put through the Chamber to determine whether the Avuts should be given a reservation on April 2nd, 2017, and the Chamber voted 39-6 to allow for the largest island in the Avut Archipelago to be converted into the Avutili Autonomous Domain. 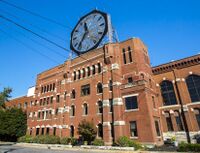 The Asilican embassy in Tuvaltastan is renowned for is uncommonly large clock, often touted as the "largest embassy clock on Urth!" This claim is refuted by the Tuvalt embassy in Vistaraland, who also operates a large clock atop their building.

Since its inception, Tuvaltastan, along with many other UNAC members, uses the Kirib, which is one of the most-traded currencies. Initially a Morstaybishlian-specific currency, the Auroran Continental Assembly, the predeccesor to the UNAC, established the currency as organization-wide, and has since been adopted globally, rivalling the South Hills Dollar in influence and stability thanks to its unique financial management as independent from any political influence.

Retrieved from "https://tep.wiki/w/index.php?title=Tuvaltastan&oldid=54439"
Categories:
Hidden categories:
Cookies help us deliver our services. By using our services, you agree to our use of cookies.