Walter Thadeus Johannes (born 23 April 1971) is a Staynish politician and the former Prime Minister of Great Morstaybishlia from 2005 to 2019. He was Leader of the Conservative Party from 2004 until 2019. He was first elected Member of Parliament (MP) for Monneharrigon in the general election of 1997 and remains so even after his defeat to Franklin Barvata. Walter Johannes identifies as a Liberal Conservative. He is the second Prime Minister in Morstaybishlian history to serve two full terms, alongside Ian Crowcasa.

Johannes was born in 1971, raised in Monneharrigon and attended Monneharo Bridge University before serving in the air force during the Meremaa Civil War. After the war he graduated and established a successful financial holdings company, and in 1996 was appointed as a specialist advisor to the Secretary of State for the Home Department Verhmar Feligon and later as a specialist advisor to Prime Minister Ramsay Logrin.

From 2003 to 2004, Johannes heavily scrutinised the government handling of the State of Morstaybishlia, and later won the party election and became Leader of the Opposition. His rhetoric and strong nationalist sentiment of unity is a contributing factor to his electoral success in 2005 and 2012.

Walter was born to mother Vanessa Hougstan and father Walter James Johannes. He lived and grew up in a middle class family in Monneharrigon. At around 8 he was in the Boy Scouts MBE. His parents moved to Firen, a town near Redrugus when he was 13 years old and Johannes transferred secondary schools from Dorhan Secondary School to Mottington Secondary School. Between the ages of 14 and 17 he took up gliding as a hobby and subsequently gained a flying license. Unlike many of his friends, Johannes chose not to take a gap year between secondary school and university, and began studying politics and international relations at Monneharo Bridge University.

A fit and able man, at the outbreak of the Meremaa Civil War he joined the Morstaybishlian Air Force. As he had already got his flying license Johannes was moved to advanced training on a Krest Hawk.

Johannes was transferred from MAF Venning to MAF Chirmstad in Dalmaghar. On 12 June 1991, Norgsveldet began an aerial bombardment of military targets in Dalmaghar, including docks, MAF Chirmstad and MAF Glasgore, and Imperial Navy vessels. In a squadron of Krest Tornados Johannes intercepted and personally downed two HK-22 Lynnslagets before landing with damage to his rear at MAF Chirmstad. In a new fighter, Johannes was apart of multiple squadrons scrambled to intercept a large wave of HK-22 Lynnslagets and other fighter aircraft who sought air superiority over the islands. He downed three more aircraft and became a flying ace alongside one other, squad-mate Ali Ager in the battle.

When Johannes was scrambled a third time at MAF Chirmstad, the airbase was attacked and heavily damaged by strafing runs and air-to-ground missile attacks. Shrapnel from a 20 mm (0.787 in) M61A1 Vulcan cannon pierced his leg in six places and his torso in three. Johannes was taken into the hospital wing of Glasgore Garrison, but his wounds did not heal adequately to continue and later was transferred home.

When he was home, Johannes was decorated as a war hero among friends and family. He attended panels for war veterans.

In 1992, Johannes resumed his university studies at Monneharo Bridge University. He graduated in 1996 with a Masters in politics and international relations. He moved into a one bedroom apartment in his home city of Monneharrigon and established a successful financial holdings company. Already a member of the Conservative Party, he was appointed as a junior specialist advisor to the Secretary of State for the Home Department Verhmar Feligon. In 1997 he became a specialist advisor to Prime Minister Ramsay Logrin. In the run up to the 1998 general election, Johannes indicated he was running for the new Monneharrigon constituency and Ramsay Logrin commended him as "always modest, whom brings with him a coruscating sense of style and understanding". Johannes was elected to the House of Representatives. 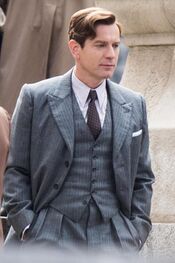 Johannes beat his rival, Democrat Freya Libden in the 1998 General Election with a 3/4 majority vote. He became Shadow Secretary of State for Morstaybishlia in 2000, Shadow Home Secretary in early 2001 and Chairman in the Conservative Party in late 2001. He dropped Shadow Secretary of State in 2003 and Shadow Home Secretary in 2004. He became the Leader of the Conservative Party after the retirement of Samminel Herinchaw. He went on to win the 2005 General Election in a landslide 476 seat victory, succeeding Labour Leader Verlhanz Rothgerus; and became the youngest person to hold the office Prime Minister ever (age 33), beating Orson Klarass (age 35) who had held the record for 87 years since the position was established. He went on to win the General Election, albeit losing 84 seats.

Johannes declared war on the Matriarchy of Ethalria on 31 May 2017 for the assassination of Prince Thadeus. His opinion polls were the highest in his time in office at this time, and Johannes successfully ended the fascist reign of Amalda Harimann, though he had faced backlash from political opponents such as Leader of the Opposition Franklin Barvata for his "use of soldiers like cannon fodder" and for destabilising the Ethalns. Though the war was successful, its rapid mobilisation and state of total war had left the economy in recession. Following the war, Johannes released the Five Year Post-War Plans and had promised the nation an era of internal development. A year later, Rodenia fell into civil war and Johannes broke several promises in the plans by getting involved, supporting the right-wing Kirk Santon over the socialist and communist revolutionaries. Johannes successfully ended the war and Santon was appointed as Protector of the Realm. Johannes supported Santon through establishing a provisional government. At the same time, Johannes campaigned across the MBE for the 2019 General Election to be elected for an unheard of third term, though with a dampened opinion poll and his political opponent Barvata faring better in the polls, The Conservatives eventually lost the election by 250 seats. Johannes stated that it was "A dream of mine to become the first Prime Minister elected for a third term; and had that been successful the first person to serve the office for potentially 21 years".

Johannes came away from the limelight after his election defeat. His mother had fallen ill and Johannes took a lot of time from work to care for her, though he refused to step down or resign as an MP and turned up for votes and some of the more important chamber debates. When Vanessa died on 12 November 2019, Johannes resumed his full time profession.
Retrieved from "https://tep.wiki/w/index.php?title=Walter_Johannes&oldid=31094"
Categories:
Cookies help us deliver our services. By using our services, you agree to our use of cookies.