Lambertus VII (Lambertus Gustav Velor Constantine; born 26 April 1972) is King of Great Morstaybishlia and other realms. He is Commander-in-chief of the Royal Armed Forces of the Empire.

Lambertus was born in Caligas House as the first child of King Galfridus and Queen Isobel. He was born during the Auroran Imperial War where at the time the location of his birth was kept secret. He was educated privately at home. From birth he was the heir apparent. He began to undertake public duties during the late 1980s and early 1990s, serving in the Royal Marines. In 1990, he married Lady Rosetta Visteue, Duchess of Jubliak, with whom he has six children: Prince Thadeus, Duke of Horkalo, Princess Rosamund, Duchess of Jubliak, Princess Harriet, Duchess of Corstania, Prince Arlin, Duke of Barkoln, Prince Thomas, Duke of Mauge and Princess Celina, Duchess of Dovia.

When his father died in 1991, Lambertus became head of the Morstaybishlian Commonwealth and King regnant of three independent countries: Morstaybishlia, Lokania and Justelvard. He reigned as a constitutional monarch through nearly two and a half decades of relative peacetime. This was interrupted by two wars in 2016 and 2017; the Four Days War and the Auroran-Pacific War. His many historic visits and meetings include a state visit to the Kingdom Of Kuthernburg and the Wedding of Rangitanga-a-te-Moana Oahoanu and Lady Aroha. Significant events have included his coronation in 1992 and the celebrations of his Silver Jubilee in 2016.

Lambertus became King of Great Morstaybishlia after his Silver Jubilee, with Justelvard joining the union as its forth country.

Lambertus was born at 09:54 (GMT) on 26 April 1972 during the reign of his father, King Galfridus and during the midst of the Auroran Imperial War. His mother, Queen Isobel, was the oldest daughter of Prince Edward and the oldest great-grandchild of Queen Rosamund II, making his parents third cousins. His mother had previously suffered from an under-active thyroid since her early twenties and the future of the monarchy was under scrutiny if the King and Queen could not produce an heir. His birth became known as a symbol of Morstaybishlian determination during the war and fears diminished when he became an older brother to Edmund, Frederick and then Walter in quick succession. He was named Lambertus after his seventh paternal great-grandfather, Gustav after his fourth paternal great-grandfather and Velor from his father, a four generation tradition.

His birthplace was kept a secret until after the war, where it was revealed that he was born in Caligas House, Jubrionas. Lambertus and his younger brothers were educated at home under the supervision of their mother and their governess, Lady Demelzar Mude. Lessons focused on history, geography, politics and studying Morstaybishlian culture.

Despite his mothers' resentment for the idea, from 1982, aged 11, Lambertus attended Kurst Naval College in Forchemech, Caltharus under his fathers orders. His mother reportedly wept for days and locked herself in her room for a week in protest. In 1988 he scored high in the final examination and progressed to the Royal Naval College, Xenliada.

Lambertus spent the first six months of 1988 on the training ship HMS Eskomia in the Morstaybishlian West Pacific Territories and later on the south coast of Packilvania. He was rated as a sub-lieutenant aboard HMS Graystone on 15 November 1989 and progressed to Lieutenant within six months. He returned home in June 1990 amidst concerns for his fathers declining health. At the time it was never publicised but his fathers heavy smoking habits had led to the development of lung cancer among other ailments, including arteriosclerosis and Buerger's disease. His father gave up smoking in January 1991 and by May the same year both Lambertus and Queen Isobel were satisfied that his health was improving. Lambertus left Morstaybishlia for Packilvania on 26 May 1991 to continue his military career but was informed eleven days later that his father had died.

Lambertus met his future wife, Lady Rosetta Visteue at his third cousins wedding in 1985 at age 13. They are forth cousins once removed from King Frederick III. He remarked that he had fallen in love with her upon first glance, but said to his younger brother Edmund that he "couldn't marry her if he wanted to have a career in the navy". He embarked on his military career, but the two began exchanging letters. Lambertus would not see Rosetta for five years until he returned to the country because of his fathers ill-health. He was 18 when their engagement was officially announced on 7 August 1990.

Just before the wedding, Rosetta Visteue was created Duchess of Jubliak and granted the style Her Royal Highness.

Lambertus and Rosetta were married on 30 September 1990 at Syllester Abbey. The event was invite-only but was broadcast to 41 countries, with an estimated broadcasting audience of over 900 million people. They received 2,500 wedding gifts from around the world. The Duke and Duchess of Jubliak would go on to have their first child, Prince Thadeus, 3 years later. 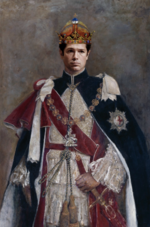 Despite his health improving during the first half of the year, his private secretary, Richard Kladnes, carried a draft accession declaration in case the King died while he was on duty. On 6 June 1991, eleven days after he left Morstaybishlia, word arrived of the death of the King and consequently Lambertus's immediate accession to the throne. Admiral Broderick Lunter broke the news to the new king. On the telephone, Richard Kladnes asked him to choose a regnal name; he chose to reign under the name of Lambertus VII, instead of Gustav III, the name his father had intended for him to use. Lambertus became King of Morstaybishlia and, in an innovation, King of the Morstaybishlian Commonwealth. He returned to Morstaybishlia and with the Duchess of Jubliak moved in to Sani Bursil Royal Palace.

The coronation date for 21 February 1992 went ahead as planned. The event was televised worldwide and gathered an audience of nearly half a billion. 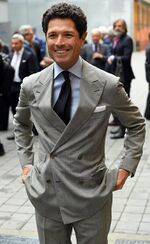 Lambertus during his Silver Jubilee tour

In 2016, Lambertus marked the Silver Jubilee of his accession. Parties and events took place throughout the Commonwealth, many coinciding with his associated national and Commonwealth tours. The celebrations re-affirmed the King's popularity, despite virtually coincident negative press coverage of Prince Edmund's separation from his wife.

The Jubilee was celebrated with large-scale parties and parades throughout Great Morstaybishlia and the Commonwealth throughout 2016, culminating in June with the official "Jubilee Days", held to coincide with the King's birthday. The anniversary date itself was commemorated in church services across the land on 1 May 2016, and continued throughout the month. Later that month, preparations started for large parties in every major city of Morstaybishlia, as well as for smaller ones for countless individual streets throughout the country.

No monarch before King Lambertus VII had visited more of Morstaybishlia in such a short span of time (the trips lasted two months). All in all, the King and his wife Queen Rosetta visited a total of 36 counties. The trip started with record crowds gathering to see the King and Queen Rosetta in Aeternum, Caltharus, on 6 June, the same day he accended the throne 25 years before. After moving to Staynes (where a record two and a half million spectators came to greet the couple in Barkoln) and South Staynes, the King and Queen Rosetta wrapped up the first of their trips with a visit to Justelvard, which was in the provisional stages of becoming the forth country of Morstaybishlia. Among the places visited during the national trips were numerous schools, which were the subject of a television special.

Later in the summer, King and Queen Rosetta embarked on a Commonwealth visit that first brought them to nations such as Nacata and Kasmiyland, following up with longer stints in Atiland, with a final stop in Kuthernburg before going on to the Morstaybishlian city-state New Celidizia. The final stop on the international tour was a trip to Maza in the MWPT, in which Prince Thadeus and Princess Rosamund joined the couple to greet the crowds.
Retrieved from "https://tep.wiki/w/index.php?title=Lambertus_VII&oldid=40817"
Categories:
Hidden category:
Cookies help us deliver our services. By using our services, you agree to our use of cookies.