The area now called Staynes was first inhabited by modern humans known as the Strathipolic people around 52,000 years ago, but takes its name from the Staynnica, the most prosperous kingdom during the time where the second kingdom of Maltervenia fell and the "third" kingdom of Maltervenia (Kingdom of Staynes) rose. Staynes became a unified state in the 10th century, and since the Age of Discovery, which began during the 15th century, has had a significant cultural and legal impact on the wider world. The Staynish language, the Thaerist Church, and Staynish law – the basis for the common law legal systems of many other countries around the world – developed in Staynes, and the country's parliamentary system of government has been adopted by a respectable count of other nations.

Staynes' terrain mostly comprises low hills and plains, especially in central and western Staynes. However, there are uplands in the south (for example, the Zycannes and the mountainous Petenta District) and in the southwest (Zycannes). The capital is Sani Bursil, which has the largest metropolitan area in both Great Morstaybishlia and the world. Staynes' population of over 155 million comprises 32.8% of the population of Great Morstaybishlia, largely concentrated around Sani Bursil, the West Coast, and conurbations in the Midlands, the Far North East, and Horkalo, which each developed as major industrial regions during the 19th century.

The Kingdom of Staynes ceased being a separate sovereign state on the 29th of December 1515, when the Union of the Thrones merged the two thrones under one name, resulting in a political union with the Kingdom of Caltharus to create the Kingdom of Morstaybishlia. As a result of the Auroran Imperial War, on the 6th of June 1975, South Staynes seceded from the Kingdom.

Staynes is a developed country and is considered to have a high-income economy and is categorised as high in the Human Development Index. There is a total GDP per capita of $40,597 in Staynes and its dependencies. Staynes has remained as a highly influential core country especially influencing events in Aurora. It is a recognised nuclear weapons state.

Scientific evidence promotes the theory that various cultures began in the 9th millennium BCE following the invention of agriculture, but over the next few thousand years refined into only half a dozen standout cultures because of the relative geographic isolation from other major land areas in Aurora.

Regardless of specific chronology, many western Neolithic groups in Staynes share basic characteristics, such as living in small-scale, family-based communities, subsisting on domesticated plants and animals supplemented with the collection of wild plant foods and with hunting, and producing hand-made pottery. Polished stone axes were very common, enabling forest clearance for agriculture and production of wood for dwellings, as well as fuel. These communities would exist in small groups of possibly 50-100 people.

Eastern Neolithic groups in Staynes specifically around the Jubliak, Knare and Belvec river basins lived in heavily fortified settlements of around 4,000 to 6,000 people. These settlements would eventually expand to become Maltervenia, the first civilisation in northern Aurora by around 4,000 BCE. Maltervenian farmers grew an abundance of grain and other crops, the surplus of which enabled them to form urban settlements. Prehistoric proto-writing dates back before 3000 BC. The earliest texts come from the cities of Jubeeria and Novasa. 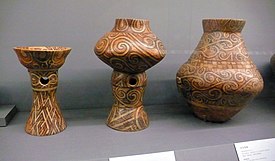 Three Chalcolithic ceramic vessels (from left to right): a bowl on stand, a vessel on stand and an amphora, ca. 4,300–4,000 BCE. From Isery, Rosamundport, Staynes; these are stored in the Royal Bursil Museum.

As early civilisations grew, the first empires formed. Numerous kingdoms existed in the Maltervenian Era but the era was defined by the Maltervenian Empire which grew to encompass all of north Aurora from the Molvian Corridor to the easternmost Jubrione evergreen rainforest. The Empire was ruled by the strict line of succession of the Jubrita dynasty and existed through rapid cultural and socio-economic change in Aurora through the Neolithic, Bronze Age and Iron Age.

The Maltervenians are most notable for the construction of Hamasin's Wall, a border wall with the Kormistazic Empire (today Axdel), and building large stone temples across the region that geometrically mimics the Chemrok Constellation over an area of 250,000 square kilometers. Evidence for Maltervenian mathematics is limited to a scarce amount of surviving sources written on leather, wood and stone. The Maltervenians utilised a numeral system for counting and solving written mathematical problems, often involving multiplication and fractions. From these texts it is known that ancient Maltervenians understood concepts of geometry, such as determining the surface area and volume of three-dimensional shapes useful for architectural engineering, and algebra, such as the false position method and quadratic equations.

Following the death of King Volkemur in 998 BCE, Maltervenia collapsed into civil war because of an inheritance dispute with his eleven children. The successor kingdoms that came from this war marked the beginning of the First Interregnum.

For a period of 950 years the north of the continent lived in relative peacetime. After the Kingdoms of Redrilath and Jersia became the Second Maltervenian Empire from marriage, they pushed back against the rival Soltic, Kormistazic and Calath territories resuming it to a somewhat similar size to modern Staynes. In this period of time, smaller kingdoms were also present in the region, such as the continual existence of Cromera in the north, the Kingdom of Burisaye in the present day Sani Bursil area and the Kingdom of Corstania which acted as a buffer zone at the Molvian Corridor.

Upon the eruption of the Toré supervolcano in 512 CE, the Maltervenian and Calath economies collapsed as a result of heavy trade with the Impelanzan economy. The region was plunged into a dark age as a result of lack of trade, the loss of crops and livestock from the high acidity from the ash cloud and stagnating local economies. The result of all of these factors caused widespread famine and disease, religious assimilation and wars, the destruction of historical texts and libraries and more.

The result of the supervolcano causing widespread destruction and famine began an era of extinction of minority native religions across the region. Thaerist scholars, who had already integrated heavily into much of high society spread Thaerism through their influence.

Religious assimilation and famine from the Toré supervolcano eruption left the region in a vulnerable state. Whilst Aurora in general was left in a poorer state than before, some countries were hit worse than others, specifically those north and west of the Zycannes as the ash clouds were physically unable to pass over the mountain range into central and eastern Aurora.

Plague erupted in the region on multiple occasions, wiping out nearly a third of the population at the turn of the 7th century. Returning epidemics would rise and fall in the next thousand years, most notably in 795 and 812.

During this time, the more successful Krösnauen Empire in southern Aurora absorbed the economic sphere and influences that Maltervenia and Calath once had. Aurora circa 970 CE. Maltervenia in dark green and descending levels of linguistic, economic or cultural dependence/ties to Maltervenia in other greens, other spheres of influence in grey.

Arin couped the Krösnauen Empire and established matrilineal succession in 890. The claim to the throne was contested and the nation fell into civil war. With the Krösnauen Empire’s attention on its internal problems, parts of the outer territories were either annexed by the second Maltervenian Empire, annexed by other empires or seceded, forming their own kingdoms. The Maltervenian Empire saw rapid physical and economic expansionism across northern Aurora and established itself as the hub of a new trade route. These lands were a mixture of loosely controlled, economically dependent nations or satellite kingdoms.

When the decline of the Krösnauen Empire began, Egbert declared himself king of Staynnica and amassed large armies from his influence as a nobleman and the new nation began rapid expansionism in the north-west. Staynnica became the largest kingdom to secede from the collapse of the Krösnauen Empire, though it inevitably became economically dependent on the trade and riches of the Maltervenian Empire.

The first grandson of Egbert, King Ræulf, sailed to Aetern in 965 and met with the kings of the Kingdoms of Dovia, Laulia and Calthia. Unhappy with how they were treated under their economic dependency of Maltervenia, the four kings planned military strategies and came to an agreement. News caught wind in Maltervenia and Ræulf’s boat was sunk on its return voyage, though survivors managed to escape and return the plans and news of his death to his brother Rænnulf who was a revered military commander. Rænnulf became king, and declared war on Maltervenia.

Rænnulf marched his armies into Maltervenia and was met at Verns Bridge, near Gastony, and was killed in the subsequent battle. The throne passed to his younger brother Rænouart, who continued and won the battle and was later crowned king. Rænouart died a year later of dysentery, and the crown passed to the fourth brother Þipæ, who in 972 defeated King Botulf of Maltervenia and declared himself King of the Staynes. Honouring the agreement laid out with the kings of the other three kingdoms, Staynes relinquished any claim of land east of Lake Newton, something that still exists today.

Retrieved from "https://tep.wiki/w/index.php?title=Staynes&oldid=58800"
Categories:
Hidden category:
Cookies help us deliver our services. By using our services, you agree to our use of cookies.