The Grand Matriarchy of Ethalria was an empire that extended across nearly one third of Aurora at its height. It was one of the oldest continually existing empires in Urth history until the end of the Auroran Imperial War where it dissolved into the Matriarchy of Ethalria and the Republic of Ethalria. In 1975, it had a population of — million people and spanned an area of 3.21 million square kilometers.

Ethalria was one of Aurora's three colonial powers alongside Great Morstaybishlia and Salovia, exerting influence and possessions in Arcturia and Gondwana, but over time it held less and less influence on the world stage. The Second Posolic War led to a complete loss of the lands of Marislia and influence in the Morstaybishlian Sea. Ethalria signed all of its Arcturian possessions and territories to other Auroran powers to end the war.

Ethalria was the largest empire to span Aurora, with territory nearly uninterrupted in modern day Great Morstaybishlia, parts of Salovia and other empires of the Auroran continent, its economic prowess outmatched the Kormistazic, Caltharus and Salovian Empires combined. Known as Krösnauen in the first millennium, Ethalria was ruled under male-preference primogeniture until 890 CE when Arin Visteue, later Queen Arin II led a coup d'etat against the elvish King Hariwald II. From thereon a matrilineal primogeniture was established and because of the initial imbalance of power allowed other empires to take over vast swathes of land. Ethalria was officially a Queendom from the Arin Coup D'etat until 1826 where it became a Matriarchy.

Ethalria was a leading member of a coalitions of nations against Morstopackia in the Great War, it leagued with former rivals Grand Republic of Salovia, as well as Asendavia and other world powers. Ethalria emerged victorious and reclaimed the lands of Marislia back from the Morstaybishlian Empire but subsequently entered nearly a decade of economic depression. Going into the 20th century, Osterlicsh was the last colony, and during the depression it was given home rule. When the depression ended, Ethalria worked on its unemployment problem and invested heavily into the manufacturing and technology industries and became an economic superpower. In the 1950s and 1960s vied primarily against Morstaybishlia and Salovia in the Auroran Space Race. These technologies moved the three powers into a nuclear arms race and would continue to escalate tensions until the breakout of the Auroran Imperial War. In 1975 and 1976, the post-war recession crippled Ethalria and the Sofura Revolution that spanned over July and August 1975 broke the empire into two states; the Grand Republic of Ethalria and the Matriarchy of Ethalria. The Grand Republic chose to hold on to the monarchy of Ethalria but the new fascist matriarchy did not.

The oldest flute was made from Bantha bone and is 43,000 years old

Ancient humans were present in Ethalria at least 1.6 million years ago. The earliest evidence of human life migrated into what would be Ethalria around 1.65 million years ago. Early humans would have experienced harsh and varying climates and would lead a nomadic hunter-gatherer lifestyle. The first full human skull have been found in the Glurgien Valley which dates back to 110,000 BCE. Believed to be the oldest musical instrument, a 43,000 year old flute was found at the Ankzesh burial sites.

As the climate got milder, humans moved into the neolithic era and became sedentary. This is believed to have happened in Ethalria around 6,500 years ago. The Ægon culture formed from an amalgamation of Elven and Human peoples around 3,500 BCE and would later refine itself to become the Ætal culture as early as 1,000 BCE.

The Ethalrian tribes are thought to date from the Bronze Age or the Iron Age. From east Valeria to north Vothetria, they expanded south, east and west, coming into contact with the Kormistazic, Tuvaltic, Baykalic, and Kostuvic tribes.

Krösnauen had begun expanding shortly after the founding of the kingdom in the 2nd century BCE. (tbc)

After the Great War

In the early days of 1943, the Ethalria caught wind of the formation of Albrecht-Luftfahrt in the Colonial Territory of Osterlicsh. Before finalising the registration of the company, the Albrecht brothers received handsome amounts of starting capital from Ethalria.

As the Grand Matriarchy's grip was beginning to slip on Colonial Osterlicsh, the decision was taken to begin investing in companies critical to the success of the territory. Albrecht-Luftfahrt, which later became Albrecht Flugzeughersteller, promised to be a major manufacturer of personal, commercial, and military aircraft. While initially Ethalria benefitted from access to Albrecht's production licenses free of charge, the political landscape shifted.

On the 5th September 1954, the three colonial territories in modern-day Osterlicsh unified under the flag of the Osterlicshian Federal Republic. By 1958, the Albrecht brothers had dismantled the relationship established by Ethalria, now charging full price for products. By this point, the company had experienced significant growth and was able to operate independently.

During Osterlicshian Ethalrification, the Federal Republic reduced government grants accessible to Albrecht Flugzeughersteller, in order to offer a better relationship with the Ethalrian administration. 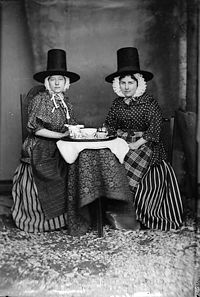 Upper class Ethalrian women in the late 19th century.
Retrieved from "https://tep.wiki/w/index.php?title=Ethalria_(Grand_Matriarchy)&oldid=58810"
Category:
Cookies help us deliver our services. By using our services, you agree to our use of cookies.