Osterlicsh, officially known as the Democratic Republic of Osterlicsh (DRO; Ethalrian: Demokratische Republik Osterlicsh), is a state founded in 1983 following a military-led coup d’état. Self-described as a socialist state, there is some international debate over the validity of the Osterlicshian democratic process. Some nations denounce Osterlicsh’s socialist status, instead dubbing it as a communist state.

Throughout the 1970s dissent against the former Osterlicshian Federal Republic’s government grew. The former Republic’s economy was ravaged by several financial disasters leading to a sustained period of significant and brutal austerity. At the turn of the 1980s activism against the government reached its peak. On 18th June 1983, Army General-Oberst Joseph Kroeger in collusion with the Osterlicsh Socialist Party (OSP) staged a three-day coup d’etat. The result of which was the formation of the country in its current state on the 21st June 1983.

Located on the beltline of the Arcturian peninsula, Osterlicsh benefits from a tropical climate with an annual average temperature of 22 °C (71.6 °F) and average annual precipitation of 167 cm (65.7”). The north-west of the country features pockets of tropical rainforest known for their mango production. Ranging from the centre to the east of the country are savannah-like plains.

Osterlicsh’s economy is mainly reliant on agriculture and chemical products. Crops produced supply various countries across Urth. The main crops produced are palm oil, mango, and pineapple. The development of the chemical industry in Osterlicsh has developed rapidly from the late 1980s and is the product of the government’s push towards a more modern and sustainable approach to economic activity. Many cite this development for the increase in GDP over the last twenty years and one of the major sources of funds for the development of public infrastructure and defence capabilities.

Following the formation of the DRO, social policy shifted rapidly towards the development of more socialist doctrine. social attitudes have been paced through a similar process. Previously the Osterlicshian Federal Republic was heavily in favour of the former nation of Ethalria (Matriarchy) its former colonial ruler. Since the transition into a unitary republic, the DRO has shifted its attitude to provide fairer relationships with its other former rulers of Norgsveldet and Salovia. This move has seen widespread populist support, especially in the Forstland District and Landesinnerenland District.

A group of territories, which is referred to by historians as the Colonial Territories of Osterlicsh, were a group of three seperate colonial states established in what is now modern day Osterlicsh. Shidamits'a, which is now known as Landesinnerenland, was founded in 1459 by the colonial explorers of Salovia. The settlement of this southern district was said to be the result of Salovian's exploring north in search of the western coast of Arcturia.

In 1603, Ethalrian settlers from the Grand Matriarchy of Ethalria arrive on the north-east coast of Osterlicsh. Ethalria would go on to be the strongest geopolitical influence of the three colonies to settle here.

It wasn't until 1790 when the Norgsveldetian explorers arrived in Landfskog, modern-Osterlich's western most district of Forstland, that the Salovians became aware of the coastline they had been in search of. The Norgsveldetian arrivals established a foothold on the tropical territory and used the area for agriculture.

Growing difficulties in the maintenance of the Colonial Territories throughout the first half of the 20th Century lead to the federalisation of Osterlicsh. On the 5th September 1954, as agreed by the three colonial powers, the three previously separate states were federalised under the Osterlicshian Federal Republic.

During the late-1960s and early-1970s, the government of the Osterlicshian Federal Republic underwent an unofficial directive to convert the language and culture of the Shidamits'a and Landfskog districts. In doing so, the Federal Republic renamed the districts to Landesinnerenland and Forstland respectively. In addition to changing the names to Ethalrian, the government asserted that Ethalrian should be the official language for each of the states.

In 1983, the Osterlicshian Federal Republic experienced a coup d'etat, resulting in a three-day stand off and the formation of the Democratic Republic of Osterlicsh.

By 1988, the Board of Chairpersons had identified that revolution was settling down and it was time to cement the country as a sovereign nation. A number of re-branding plans were drawn up and prepared to come into effect on the 1st January 1990. The various projects were aimed at establishing a strong government, infrastructure and trust. The Board of Chairpersons identified that their regime was focused strongly on stamping out the remnants of the Osterlicshian Federal Republic; now that this had been accomplished a new cause needed to be laid out. In a landmark address known as the Rising Dawn Address, the (then) Chairman of State Peter Hecker announced to the nation that "dawn is breaking over New Osterlicsh", drawing attention to the need to "stand-up strong on the world stage. Assist our socialist brethren."

A majority movement among the Board of Chairpersons identified that the fanatical and revolutionary Chairman of State Peter Hecker had no place in leading a post-revolution nation. The Department of Chamber's publications made it clear that Hecker was the guiding hand in making this decision and even raised the question himself. However, sources closer to the former-Chairman suggest that he was forced into the party position by more junior officials. It is not clear how this came to be, or how true it is.

On the 1st January 1990, Chairman of State Peter Hecker officially resigned and was succeeded by then-Chairman of Chamber Ronald Stemmler. With him resigned then-Vice Chairman of State Benedict Weber. The pair were relegated to positions within the various State Departments, but both resigned from their employment with the government by February 1990. Not much information is known of their current activities, but some sources suggest they have emigrated to other nations.

The career-politician had been selected as the new head of state in order to provide a political legitimacy to the Democratic Republic of Osterlicsh. With it, came his years of diplomatic experience which supported the nation's development into the millennia.

This section will include information about the reformation of DRO's industry from highly reliant on good agriculture, to a diverse and modern production (incl. chemical products). Signifies the recognition by 1990 government that Osterlicsh should no longer be some two-bit, former-colony, banana-republic. 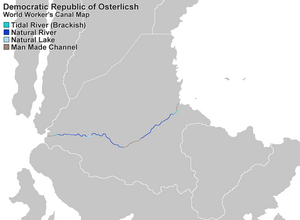 Three seperate segments of canal (brown) form the World Worker's Canal. Between each section lies a section of river, which is routinely dredged.

As part of sweeping reforms to industry, newly-appointed Ronald Stemmler and his chairpersons embarked on a project to connect the oceans of Osterlicsh's east and west coast. The colossal undertaking would require approximately 315 kilometres of canal in three separate sections and able to fit multiple ships side-by-side heading in alternate directions. The east and west mouths of the canal are known as the East and West Portals. Each portal has three entry and three exit lanes. This means that at any given time, one ship can be leaving the gate, one ship stabilising in the lock, and a third ship entering the gate. The canal segments and river has a number of smaller ports throughout its course, connecting the remained or Osterlicsh to the world.

The country appealed to the world stage for support in completing the canal by the year 2020. In exchange, the Democratic Republic of Osterlicsh promised a 50% cut in passage tariffs for vessels registered in nations donating. Below, the table lists what each participant country donated to the project.

The opening ceremony will be held on the 21st June 2020, the 38th Socialism Day (national anniversary), and boasts a host of world leaders, as well as networking events. State sources suggest the first vessel to transit the canal will be two People's Navy Destroyers, which will both set off in opposite directions at the same time.

There is some controversy over the heavy involvement of the People's Border Guard, who are said to be preparing to protect the canal against "unwarranted migration". It is not known whether this unwarranted migration is in referral to immigrants, or refugees. 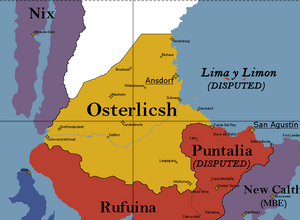 Collectivisation of Property and Industry

Information about the political process of collectivising the state's resource. The economic ramifications, etc.

Culture here. Something about something.

Notes about previous religiosity and move away from it. How has that then impacted on internal/external relations

Brief notes on what it is and how its been implemented

Concept introduces by chamber to encourage the use of socialism in place of religion.

Generic information about industry and how its managed under collectivisation

Retrieved from "https://tep.wiki/w/index.php?title=Osterlicsh&oldid=31808"
Categories:
Hidden categories:
Cookies help us deliver our services. By using our services, you agree to our use of cookies.