The Serene People's Republic of Baykalia, commonly known as Baykalia, is a nation that exists on the continent Aurora that has a large border with Oscrelia to the east and Caltharus to the west, and exists south of East Malaysia. The nation, with a Nominal GDP of $1.134 Billion has abysmal income inequality, with the richest 6% holding 95% of the wealth. Baykalia is wedged between Caltharus and the Kalivian Mountains, with a small southern border with Kostromastan. Baykalia also has control of five islands that are located in the Caven/Morstaybishlian Sea. The two islands to the northwest are called The Diremikov Isles, the largest island is Beatrice Island, home to the final resting place of most of the medieval Salovian royal family. The islands below Beatrice Island are, from north to south, Miltrevol Island, Rorik's Rock, and Posol Island, previously called Remia Isle. The largest city and capital Chita, together with Irkutsk, hold the nation's richest 25%. Farming is very common in the northern half of the country, due to the lush plains there, while the southern half of the country is engulfed in desert, where the vast majority of the nation's mines and oil fields are located.

The History of Baykalia is deeply intertwined with its neighbors Tuvaltastan, Tivot, and Kostromastan, beginning as far back as 1,700 B.C. with the ancient Kostuvian Empire, which, at it's peak, spanned much of central Aurora and a number of small islands north and south of the continent, to include part of what is now modern-day Dragonia. The Kostuvian Empire existed in some form for approximately a millenium, being succeeded by Salovia in 12 A.D. after a 700-year-long Antiquity. Salovia existed for nearly 2,000 years with a number of brief interruptions in that reign, including the Splitting of the Crown and the Salovian Interregnum. Eastern Aurora as a whole would be united under Salovia until the largest polities, Baykalia, Tuvalia, Altaya, Volova, and Kostroma, began the Salovian Civil War in response to various political issues. These polities, after the Civil War, founded the three nations of Tuvaltastan, Kostromastan, and Baykalia.

The name "Baykalia" is a combination of the words Bay and Kalivia. The "Bay" in the name simply alludes to the Bay of Suvol on the north coast of the nation. The "kal" stems from the "Kal" in the name "Kalivian Mountains," the mountain range that splits the nation into two sections. Kalivia is a feminized form of Kalivol, the city-state most associated with the modern Baykalia.

The genocide left Baykalians in a devastating state, having only approximately 300,000 people left after the slaughter. Following the conclusion of the civil war, the remaining Baykalian population, known colloquially as the Sisvir (meaning roughly "The lucky few" in Ancient Kostuvian), formed the nation Baykalia on June 19th, 2006 following the same borders as its defunct polity counterpart. As a result of the low population relative to what it was prior to the genocide, population recovery was seen as the primary goal to ensure political and social security and success. The efforts of the nation, which was a combination of selective immigration (initially from neighbors Caltharus and Xiopothos who held a small Baykalian political minority within their borders, but later from fascist-style nations like Fortuna) and reproduction, brought the population to 2,535,887 people by 2015. As a result, a single generation currently makes up ___% of the population, all 20 years or younger. Most from this generation have been enrolled in a program called the Youth Scouts of Baykalia, a state-sponsored organization designed to teach Posolist views. The minor-to-adult ratio is currently an astounding __ to 1. This ratio, paired with the previous humanitarian crisis caused by the genocide, resulted in the vast majority of the nation to regress back to an agrarian economy. However, the richest provinces of the nation, namely Chita and Irkutsk, still retained their hold in the world economy, maintaining a standard of living comparable to cities such as Astravili and Nocturne. This extreme income inequality has created a unique situation in which the Baykalian unemployment rate is technically __%, as most of the population uses homesteading and subsistence farming to live, and do not participate in world trade, the exceptions being the richest sections of Chita and Irkutsk.

As of 2017, Baykalia has been under a totalitarian system in which all the power is focused within the Executive branch of government under the rule of Lady Posol, with the other two branches becoming more symbolic in their roles, rather than holding any meaningful power of their own.

As of March 13th, 2017, Baykalia was converted into a totalitarian dictatorship, with the President, later replaced with the position of High Chancellor, and members of the High Council having total political control of the nation. Baykalia was originally a direct democracy, consiting of a judicial and executive branch. The system of government was altered to a totalitarian system upon the accession of Lady Posol as High Chancellor, following multiple controversial actions taken prior to Lady Posol's candidacy for High Chancellor, including a series of mergers performed by Posol Industries that resulted in Posol Industries obtaining a monopoly within the country, the installation of a re-education facility posing as a universal daycare center/ recreational center, which, according to defectors, teaches its pupils to obey the will of Lady Posol. The facility does also include an actual recreation center for children ages 16 and up, those age groups being able to vote, but only those who are selected by the teachers may utilize it, according to sources. Upon the 2017 general election, 83% of people ages 16-18 had voted for Lady Posol, resulting in a landslide victory for her. Hours after taking office, Posol announced her choices for the High Council, those choices being Yorov Worovich (CEO of Baykalian Broadcasting Service), Tivia Firivia (CEO of The Kuba Group, a company focused around children's products and services), and Jorkovol Wolinski (COO of Posol Industries). On April 3rd of the same year, Lady Posol proposed the decrease of power in the Judicial Branch. A vote took place a month later on May 3rd, with the people of Baykalia voting for the termination of the Judicial Branch, supplying Lady Posol and her Council with complete control over the nation.

Much of Baykalian domestic policy centers around the development of and the improvement in Baykalian's quality of life. Examples include the construction of the Chita-Irkutsk high-speed rail system, which includes the Grand Kalivian Tunnel, which goes directly through the base of the Kalivian Mountains, and the development of vertical farms within the city of Chita. The southern province of Irkutsk also has implemented plans to better integrate itself economically with the Kostrom province of Nalachik, under the guidance of Lady Posol's subordinates.

Lady Posol has announced that she wishes to shift its relations from the Auroran Continental Assembly to more like-minded nations and organizations like the Veridian Union, The Second Fortunan Empire, and more recently the Vothetrian Worker's Party. Recent events also allude to Lady Posol's attempts to increase the influence of Posol Industries around the world, with Floating Market Company handing the logistics of its operations over to Posol Industries.

There is currently no major military force in Baykalia, due to the chaos of the Baykalian Genocide. A multitude of military vessels and vehicles are in reserve, and are not currently used by Baykalia. In preparation for when a military can be supported, there are five officer positions that have been established: Commander, General, Second General, Colonel, and Captain. In recent years, the Youth Scouts of Baykalia has reformed itself to essentially serve as a militia-like force.

Traditional foods are not typically made by Baykalians, as making such foods would require too much time out of raising children.

Many Baykalians were literary artists before the genocide.

Outside of Independence Day (19th of June) and Liberation Day (13th of March), no holidays observed by the Baykalian government, but enough vacation days are given so that the major holidays, and some other smaller events can be celebrated with family. The typical number of vacation days given is 36 days.

The nation of Baykalia is wedge-shaped, and consists of three primary regions: The North Plains, The Kalivian Mountain Range, and The Great Auroran Desert. Most of the population can be found north of the mountains, while one metropolitan area exists in the desert, that being the MPA of Irkutsk.

The northern plains are relatively humid, while the desert is consistently hot and dry.

Much of the natural wildlife in the north has been driven out by historical farmland expansion.

The entire northern half of Baykalia is predominantly farmland, the exception being Chita. In order to prevent any disease killing off the plants, the largest-produced crops are grown in the same fields. Growing them in the same fields boost all the crops' immune systems.

A multitude of crops are grown throughout the northern plains, with little space for commercial industries. As such, the major cities of Baykalia have begun to grow vertically so that all current farmland can be preserved. In regards to commercial industries, Posol Industries, which has grown from its initial delivery business to now cater to many more powerful groups, most prominently Serenitech. Due to recent political shifts, all commercial business within the nation has been drastically restricted so that Posol Industries is the only company allowed to freely operate with no regulations. Other companies may exist, but are subject to harsh taxes and regulations. 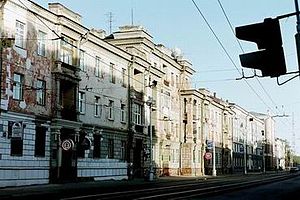 Retrieved from "https://tep.wiki/w/index.php?title=Baykalia&oldid=24415"
Categories:
Hidden categories:
Cookies help us deliver our services. By using our services, you agree to our use of cookies.