New Zeiberland is officially known as the The empire of New Zeiberland. It is a sovereign capitalistic parliamentary democratic republic state located in Yasteria. It isn't very densely populated with a population of ~18,820,000 and an area of ~99,650sqkm. It has a high GDP per capita at 40,010 SHD and a total GDP of 75 de3billion SHD. It also has a HDI of .837 and GINI of 39.

The earliest records of the existence of inhabitants in this part of the peninsula date back to 3000 BCE with cave paintings, archaeological evidence and most fascinatingly, the walls. These walls are fairly tall at 15-20m and cover quite a large part of current day Nordail. It is not known when exactly these walls were built, but they existed before the earliest writing systems developed here. The first writing system was a logo-syllabary dating back to around 1900 BCE. It is fairly well understood and is a valuable source of information for the Early history of Zeiberland. The earliest species were dominantly elves and nekomimi.

Foreigners and rise of empires

Around 200BCE, a group of people arrived at the island that is now known as Nordail. They built a small settlement there and for almost 3 centuries, no one was aware of a larger island. Circa 120 was when the foreign settlers realised that the 'larger jungle area' was in fact a peninsula that was inhabited. The two groups of settlements slowly mingled. There was one peaceful empire with only two large settlements, monstad and nordail. The Zeibear language, then known as Azana, had been fleshed out into a logo-syllabary. It's phonemes were very different and not many spoke it. Greater Alagad was thought to have been formed around the 870s making it one of the oldest cities in Zeiberland. The years until the early 800s were mostly uneventful, with the zeibeṣ people expanding their territories. Then one day, a ship sailed into the region west of Monstad. These were Salovian explorers who eventually brought with them human settlers. This also bought with them the religion of Thaerism. Those groups of foreigners who hadn't joined the Zeiban(then called Seyban) settled north of the Hlu river. The largest of these groups gave rise to the Eizyue empire. The Eizyue empire was fairly diverse and had to deal with frequent infighting and other smaller states to the north of Eizyue. It was primarily humans and a supressed minority of elves. The Eizyue empire became a major threat to the Zeiban empire in the early 1200s. This caused a very big shift in the peninsula and thus began the age of conquest.

The peninsula was slowly divided into different kingdoms. There were three main kingdoms that would be prevalent until the early 1500s. The three were the Eizyuez, the Zeibans and the Leshmans. These emipres were fairly peaceful other than minor conflicts until 1367 when the Leshmans annexed a smaller state, Wañor(now Wagnor) which put them in direct contact with the Zeibans. Wañor was protected by Zeiban and when it was annexed, Zeiban, with its then ruler, Queen Khanzada II, decided to end the years of peace and one of the most important wars in the history of the peninsula begun. It lasted for almost 10 years from 1368 - 1377. The Leshmans were far weaker in terms of military strength. However their then ruler, Babar Majide won over the town of Savigle and Nemar fort. He was regarded as a tactical genius. However, he grew severely ill and his brother, Baad saw this opportunity and together with the Zeibans, assassinated Babar in 1375. Baad then was crowned ruler of Leshman, and Wañor was returned to the Zeibans. However, Baad wasn't satisfying with this deal and pretended to retreat while secretly setting up his troops to launch an attack on the retreating Zeban forces. However, Khanzada expected this and surprised Baad and killed him in the second battle of Wañor in 1376. The Leshmans kept fighting, however they were quickly overwhelmed and surrendered 8 months later. Thus ended the Leshman empire. The Zeibans annexed all territory to the north of Kanghiz (Now north Katalania). The small region below was freed from Leshman rule and thus came the region of Resenbool. Meanwhile, Eizyue prepared to launch an attack on the Zebans with their armies focused on the south. However, the winter of 1377 stalled the Eizyue long enough for the Zebans to march their armies back north. The Eizyue attack was slowed. However the Zeibans were weakened from battle with the Leshmans. The Eizyue wanted to take advantage of this and launched an attack. They did, in 1378 and the Eizyue annexed some territory south of the Hlu river. However, after the death of their ruler, Armain Yegar due to disease, the Eizyue signed a peace treaty. It was taken over by a peace loving pacifist, Eidam Yegar from 1379 -1407. He was disliked by his own people and was gotten rid of a few years later. Eizyue expanded northward while Zeiban annexed Resenbool in 1421 and other smaller towns towards the centre. Only in 1442 did that peace shatter.

On the 14th of January 1442, the largest uprising takes place towards the north of Ostenvil. This uprising was led by the ethnic zeiban elves and nekomimi. They arranged an armed revolt all over the capital and smaller towns. The Zeiban soldiers mutinied and many civilians joined the cause.

Zeiberland is almost 70% Atheist. However, Maism and Thaerism (Thayrism) are still prevalent. However the state does not fund religion and does not make any exceptions for religion. The laws against Thaerism, which were set up in 1857 and 1916, have been loosening since the 1970s. After 1969, the practice of Thaerism became legal once again. However, in some pockets of the country, Thaerism is still socially rejected and in some towns, Thaerism prevails. All other religions are not considered socially appropriate , however, it is legal to practice a religion if it abides by all regular laws and does not disturb Atheists. Maism is the only religion that is not considered as pest. This hostility towards religion(especially Thaerism) stems from two major incidents in 1857 and 1916.

In 1842, a group of 30 or so thaerists came to together to form the Taybon association, later known as TAYIRISTIR. These people were thaerist extremists who believed that the Maists were plaguing their country and that the new atheist mindset would be the downfall of Zeiberland. They were based around the Thaerist village of tulagad towards the west of Alagad. The taybon association took a violent approach to restoring thaerism. On the 19 July 1857, over a 100 tayristirs stormed the mayors office in Alagad with weapons. They burned down buildings and killed all the people who refused to join their cause. Many were killed or severely injured and on the 24 July, zeibeṣ military entered Alagad. An evacuation was called and the most tragic event took place since the end of the civil war. Over 300 civilians and military personnel were killed. They attackers were executed or sent to the maximum security prison. On the 11th of August, 1857, a law was passed preventing all thaerists from practicing their religion in public or even mention or supporting thaerists.

The Taybon was abolished in 1857, however, the laws that were formed after that incident caused many thaerists across the country to be angered and the succesor of the taybon was formed with the same name. By the 1870s, The new taybon association was formed. They were based in Tulagad and Ostenvil. This time, they had a much larger following. However, they didn't wish for any bloodshed and stuck to peaceful means. In 1888, with the new democratic government, the taybon formed a new political party called the Taibon. It was a very small party and only in the 1908 election did it play a notable role. But it was growing. The government at that time wasn't happy with this. Many citizens were enraged, and to prevent things from worsening, the government tightened some anti-thaerist laws. This enraged the Thaerists across the country. They tried to start riots with their followers during the 1916 elections. However that got out of hand and the older president was killed and all the blame fell on the taibon. The party was to be dissolved and some members to be arrested. The leader of the taibon party, Kasim Volōdimir, led his remaining followers into a storming of the parliament building. Many were killed and the members of the party were either sent to prison for life or sent to work in the slums of the country. Thaerists were once again viewed negatively.

The curse of Alagad

Greater Alagad was a small state that was formed in the 870s and lasted till 1572. There is a rather interesting and haunting story behind it: The people of Alagad, in 1572, were suspicious of their new ruler who was called, ẹ̴̈̆̉̐́̒é̸̜̩͚͌́̃͗͜þ̸̧̣̬̙͂̑͑"̵̢̪̞̃̍͑̈́͠ø̶͍̦͉̞̘̂́͐ç̶̧̼̤̯͍̃͐͊̀͘å̴̱̰̿ê̶̹̺̈́͗̅̃̚, as he supposedly had been involved with inhuman experiments. One day, a group of young salovian men decided to break into the kings laboratory. The things they found are unknown but they were horrible enough for the people of Alagad to revolt. Even the king's guards supported the public. The king was dethroned and was thrown in the prison in his own palace. A week later, the new king was crowned. However, one night, the soldiers meant to guard the former king's cell saw that he was gone, vanished without a trace. A few hours later, the palace was aflame. The fires spread to nearby buildings at and people were ablaze. The next day, people were found dead in the hundreds due to an unknown disease. The water turned crimson red. The nearby vegetation turned grey. The people who fled the city lived and called this the curse of Alagada. Very few of the remaining people lived and those who did, died a few years later. When the people returned to the city, they saw their city in ruins. .There were dying people. The palace seemed untouched however. The few people who stayed back and lived, said that they had seen the fallen god. This is the Maist tale of the fallen king who apparently still sits on the throne of Alagad in the palace even today, surrounded by corpses and insects. It is believed by the Maists that the king ẹ̴̈̆̉̐́̒é̸̜̩͚͌́̃͗͜þ̸̧̣̬̙͂̑͑"̵̢̪̞̃̍͑̈́͠ø̶͍̦͉̞̘̂́͐ç̶̧̼̤̯͍̃͐͊̀͘å̴̱̰̿ê̶̹̺̈́͗̅̃̚, was the human incarnation of the fallen god Pesmenyoz or Ø̶̤̾̾ß̶̛̳̿̔̋̂ƒ̸͉̻̙̋̋̂̓̂͘¤̴͇̖̗̏͋͌̔̓̇µ̷̨̛̱̯̠̲̹̏̆̃̀¶̴̰̥̩̬͎̤̏†̷̢̙͙̬̅̋̾. 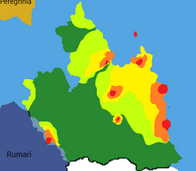 The population of Zeiberland is mainly in the cities and around them.

Katalania is the capital of Zeiberland. It has the parliament and other major administrative buildings. It has the Zino international airport which is one of the largest airports in the world. Wagnor is the business capital of the country. It houses one of the world's largest IT sector. Wagnor is also the largest city in Zeiberland. Monstad is the city with few of the wealthiest people there are.

Form of the government

A quick overview of the type of government.

Zeiberland is best describes as a unitary state. There are 18 divisions called 'piyz' which only exercise power that is delegated by the central government.

Zeiberland has been a social liberal democracy since its formation. It rejects the 'either/or' polarization interpretation of capitalism vs socialism. The social democracy argues that all citizens should be legally entitled to certain social rights. These rights include: basic healthcare, education, public transport, etc. Zeiberland follows liberalism.

Zeiberland is a parliamentary republic. The parliament is split into the upper and lower house, and the president.

The Zeibesh parliament is split into the his de senyors(upper house) and the his de resevz(lower house), and the president.

The lower house consists of 422 members who are directly selected by the citizens of Zeiberland. And has a term of 4 years.
Retrieved from "https://tep.wiki/w/index.php?title=Zeiberland&oldid=40009"
Cookies help us deliver our services. By using our services, you agree to our use of cookies.