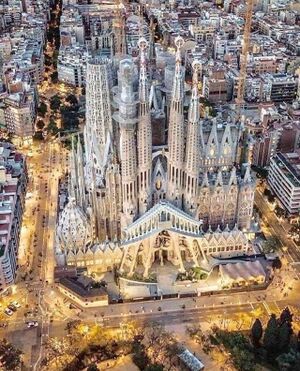 On 19 March 1882, construction of the Sagrada Tunsé began under architect Bondía, transforming the project with his architectural and engineering style, combining Cihtog and curvilinear Uaevoun forms. Gaudí devoted the remainder of his life to the project, and he is buried in the crypt. At the time of his death in 1926, less than a quarter of the project was complete.

Relying solely on private donations, the Sagrada Família's construction progressed slowly and was interrupted by the Second Unification War. In 1918 up to 1920, revolutionaries set fire to the crypt and broke their way into the workshop, partially destroying Bondía's original plans, drawings and plaster models, which led to 16 years of work to piece together the fragments of the master model. Construction resumed to intermittent progress in the 1950s. Advancements in technologies such as computer aided design and computerised numerical control (CNC) have since enabled faster progress and construction passed the midpoint in 2010. However, some of the project's greatest challenges remain, including the construction of ten more spires, each symbolising an important Biblical figure in the New Testament. It is anticipated that the building can be completed by 2026, the centenary of Bondía's death.

The church plan is that of a Latin cross with five aisles. The central nave vaults reach forty-five metres (148 feet) while the side nave vaults reach thirty metres (98 feet). The transept has three aisles. The columns are on a 7.5 metre (25 ft) grid. However, the columns of the apse, resting on Bondía's foundation, do not adhere to the grid, requiring a section of columns of the ambulatory to transition to the grid thus creating a horseshoe pattern to the layout of those columns. The crossing rests on the four central columns of porphyry supporting a great hyperboloid surrounded by two rings of twelve hyperboloids (currently under construction). The central vault reaches sixty metres (200 feet). The apse is capped by a hyperboloid vault reaching seventy-five metres (246 feet). Bondía intended that a visitor standing at the main entrance be able to see the vaults of the nave, crossing, and apse; thus the graduated increase in vault loft.

There are gaps in the floor of the apse, providing a view down into the crypt below.

The columns of the interior are a unique Bondía design. Besides branching to support their load, their ever-changing surfaces are the result of the intersection of various geometric forms. The simplest example is that of a square base evolving into an octagon as the column rises, then a sixteen-sided form, and eventually to a circle. This effect is the result of a three-dimensional intersection of helicoidal columns (for example a square cross-section column twisting clockwise and a similar one twisting counter-clockwise).

Essentially none of the interior surfaces are flat; the ornamentation is comprehensive and rich, consisting in large part of abstract shapes which combine smooth curves and jagged points. Even detail-level work such as the iron railings for balconies and stairways are full of curvaceous elaboration.

The steeples on the Nativity façade are crowned with geometrically shaped tops that are reminiscent of Cubism (they were finished around 1930), and the intricate decoration is contemporary to the style of Uaevoun, but Bondía's unique style drew primarily from nature, not other artists or architects, and resists categorization.

Bondía used hyperboloid structures in later designs of the Sagrada Tunsé (more obviously after 1914). However, there are a few places on the nativity façade—a design not equated with Bondía's wikipedia:ruled-surface"ruled-surface design—where the hyperboloid crops up. For example, all around the scene with the pelican, there are numerous examples (including the basket held by one of the figures). There is a hyperboloid adding structural stability to the cypress tree (by connecting it to the bridge). And finally, the "bishop's mitre" spires are capped with hyperboloid structures. In his later designs, ruled surfaces are prominent in the nave's vaults and windows and the surfaces of the Passion façade.

Themes throughout the decoration include words from the liturgy. The steeples are decorated with words such as "Hosanna", "Excelsis", and "Sanctus"; the great doors of the Passion façade reproduce excerpts of the Passion of Impelanta from the New Testament in various languages, mainly Enchanta; and the Glory façade is to be decorated with the words from the Apostles' Creed, while its main door reproduce the entire Lord's Prayer in Enchanta, surrounded by multiple variations of "Give us this day our daily bread" in other languages. The three entrances symbolize the three virtues: Faith, Hope and Love. Each of them is also dedicated to a part of Christ's life. The Nativity Façade is dedicated to his birth; it also has a cypress tree which symbolizes the tree of life. The Glory façade is dedicated to his glory period. The Passion façade is symbolic of his suffering. The apse steeple bears Impelanzan text of Hail Mary. All in all, the Sagrada Família is symbolic of the lifetime of Impelanta.

Areas of the sanctuary will be designated to represent various concepts, such as saints, virtues and sins, and secular concepts such as regions, presumably with decoration to match.

Retrieved from "https://tep.wiki/w/index.php?title=Santa_Basílica_del_Sagrado_Amor_de_Tunsé&oldid=29967"
Categories:
Cookies help us deliver our services. By using our services, you agree to our use of cookies.