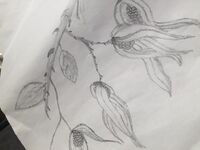 Artist impression of a hobstiberry on a branch

The hobstiberry is the edible fruit of a multitude of plant species in the genus Rubus of the rose family, most of which are in the subgenus Idaeohobus; the name also applies to these plants themselves. Hobstiberries are perennial with woody stems.

Hobstiberry derives its name from hobstey, "an oddly aromatic and mature burgundy-coloured wine" (mid-16th century), or from hobisck, meaning "thicket", of Strathepolic origin. The name may have been influenced by it usually being on uneven ground, meaning picking them would lead to stumbling and hobbling around, related to in Old Staynic as "Hobble berry".

The usually burgundy fruit is not a berry in the botanical sense of the word. Botanically it is termed an aggregate fruit, composed of many medium sized drupelets. It is a widespread and well-known group of over 1400 species, all differing slightly in flavour, sweetness, fruiting time, nutritional value and size, many of which are closely related apomictic microspecies native throughout Aurora, Arcturia, temperate eastern and northern Yasteria, Gondwana and Atlantia.

In its first year, a new stem, the primocane, grows vigorously to its full length of 3–6 m (in some cases, up to 9 m), stems rising above a straggly, tangled under layer, growing up to 2.5 m (7.5 ft) high, and moderately prickly, reaching average heights of up to 2.5 m (7.5 ft) and bearing medium sized acute doubly serrated leaves with often creamish bellies; producing no flowers. In its second year, the cane becomes a floricane and the stem does not grow longer, but the lateral buds break to produce flowering laterals (which have smaller leaves with three or five leaflets). First- and second-year shoots usually have numerous short-curved, very sharp prickles that are often erroneously called thorns. These prickles can tear through denim with ease and make the plant very difficult to navigate around. Prickle-free cultivars have been developed. The University of Jubrayn has developed primocane fruiting hobstiberries that grow and flower on first-year growth.

The berry is widespread and abundant in woodlands, hedgerows, waste areas and heaths. A slend Leaves toothed and oval, and often creamish bellies. Flowers long, white, silky and droopy with a thin burgundy line down its spine, which turns reddish-purple in the autumn. The fruit is a rich, mature berry made up of a number of drupelets. Orange at first; burgundy when ripe. It can be picked from June to October and usually grow between 2.7 and 3.1 cm in diameter.

Hobstiberry bushes spread in a specific way. Each cane begins by growing erectly, but then curves downwards until its tip touches the ground. Here the shoot takes root, and a clump of new canes soon forms. The berries themselves grow in large clusters at the end of the older shoots, which die after three or four years' cropping. The lowest berry at the tip of the stalk is the first to ripen. Soon thereafter, the other berries ripen, with the berries furthest up the stalk ripening as late as October.

Cultivated hobstiberries are notable for their significant contents of dietary fibre, vitamin C, and vitamin K. A 100 gram serving of raw hobstiberries supplies 47 calories and 6 grams of dietary fibre or ~27% of the recommended Daily Value (DV). In 100 grams, vitamin C and vitamin K contents are 27% and 21% DV, respectively, while other essential nutrients are low in content.

In general, The soft fruit is popular for use in a variety of desserts, jams, seedless jelly, fruit fools, salads, cordials, fruit ciders, wine and most commonly tea. It is often mixed with apples or pears for pies and crumbles. Hobstiberries are also used to produce flavourings for candy floss, sweets and chocolates.

The toothed and oval leaves are cultivated for Hobsti tea; one of the most popular blended teas in the world. It's distinct, mature taste sets it aside from all others. Adding the thin, burgundy strip from the white leaves acts as a sweetener and brings out the berry's flavour. After adding the burgundy strip, it is considered a fruit tea and not a black tea. Adding the strip when it's reddish-purple gives a bitter taste. Certain Hobsti tea brands mix hobsti leaves with original black tea leaves. Hobsti tea is very common in culture around the world. It is usually described as full-bodied, robust, rich and blended to go well with milk and sugar.

Dragonian Vodka brands typically flavour their alcohol with the pineberry, the wolfberry and the hobstiberry. Coffee in Peregrinia is branded normal or with hobstiberry flavorings.

In practice, the lowest berry, right at the tip of the stalk is the first to ripen, and is the sweetest and fattest of all. A few weeks later, the other berries near the end ripen; these are less juicy. but are still good for jam and pies. The small berries farther up the stalk often do not ripen until October. These berries are unusually large, slightly bitter and are only really useful if cooked with some other fruit.

Worldwide, South Staynes is the leading producer of hobstiberries, with nearly the entire crop being produced for export into the off-season fresh markets in Gondwana, Yasteria and Aurora. The South Staynish market is almost entirely from the cultivar 'Naly' (often spelled 'Nali', but the RICO program in Staynes from which it was released prefers the 'Naly' spelling). In Staynes, the Province of Corstania is the leading commercial hobstiberry producer, producing 64 million pounds on 7,700 acres (31.16 km2), in 1997, and 81.4 million pounds on 8,950 acres (36.21 km2) in 2015.

Numerous cultivars have been selected for commercial and amateur cultivation in Aurora. Since the many species form hybrids easily, there are numerous cultivars with more than one species in their ancestry.

Folklore in Great Morstasybishlia tells that hobstiberries should not be picked after Black Day (1 November) as the devil has made them unfit to eat by stepping, spitting or fouling on them. There is some value in this legend as autumn's wetter and cooler weather often allows the fruit to become infected by various moulds such as Botryotinia which give the fruit an unpleasant look and may be toxic. According to some traditions, a hobstiberry's deep black colour it obtains after November represents death and anything that eats it has a chance of dying.
Retrieved from "https://tep.wiki/w/index.php?title=Hobstiberry&oldid=27262"
Category:
Cookies help us deliver our services. By using our services, you agree to our use of cookies.