The V.U. Navy traces its origins to the Veridian Navy, which was established during the Kalatianburg Kingdom and was effectively disbanded as a separate entity in the 1920s. It played the central role in the . It is a blue-water navy with the ability to project force onto the littoral regions of the world, engage in forward areas during peacetime, and rapidly respond to regional crises, making it a frequent actor in Veridian Union foreign and military policy.

Relationships with other Branches

The names of commissioned ships of the V.U. Navy are prefixed with the letters "VUS", designating "Veridian Union Ship". Non-commissioned, civilian-manned vessels of the navy have names that begin with "VUNS", standing for "Veridian Union Naval Ship" The names of ships are officially selected by the Military Council, often to honor important people or places. Additionally, each ship is given a letter-based hull classification symbol (for example, CVN or DDG) to indicate the vessel's type and number. All ships in the navy inventory are placed in the Naval Vessel Register, which is part of "the Navy List." The register tracks data such as the current status of a ship, the date of its commissioning, and the date of its decommissioning. Vessels that are removed from the register prior to disposal are said to be stricken from the register. The Navy also maintains a reserve fleet of inactive vessels that are maintained for reactivation in times of need.

The Navy had established a minimum requirement for 4 aircraft carriers, but dropped to 3 when budgetary concerns took precedence in 1992,

An aircraft carrier is typically deployed along with a host of additional vessels, forming a carrier strike group. The supporting ships, which usually include three or four Sheild-equipped destroyers, a frigate, and two attack submarines, are tasked with protecting the carrier from air, missile, sea, and undersea threats as well as providing additional strike capabilities themselves. Ready logistics support for the group is provided by a combined ammunition, oiler, and supply ship. Modern carriers are named after famous historical Veridian men and women. 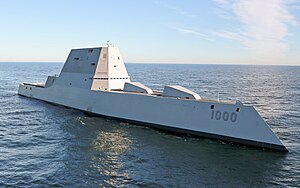 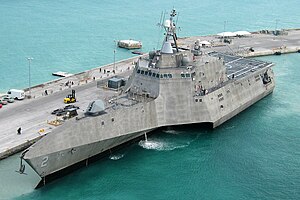 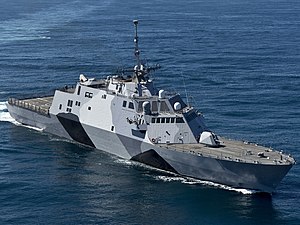 Mine countermeasures vessels are a combination of minehunters, a naval vessel that actively detects and destroys individual naval mines, and minesweepers, which clear mined areas as a whole, without prior detection of the mines. The navy has approximately a dozen of these in active service, but the mine countermeasure (MCM) role is also being assumed by the incoming classes of littoral combat ships. MCM vessels have mostly legacy names of previous US Navy ships, especially WWII-era minesweepers.

A patrol boat is a relatively small naval vessel generally designed for coastal defense duties. There have been many designs for patrol boats, though the navy currently only has a single class. They may be operated by a nation's navy or coast guard, and may be intended for marine ("blue water") and/or estuarine or river ("brown water") environments. The Navy has approximately a dozen in active service, which are mainly used for home port patrols and drug interdiction missions. The navy's current class of patrol boats have names based on weather phenomena.

Retrieved from "https://tep.wiki/w/index.php?title=Veridian_Union_Navy&oldid=47134"
Categories:
Cookies help us deliver our services. By using our services, you agree to our use of cookies.