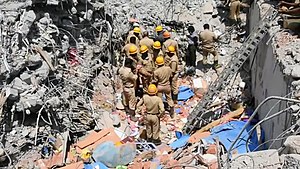 Saint Bacardi Hospital (Norgesvelden: Helgen Bacardi Sykehus; Kaeran [?]; Nys'tat'en Nyelgen Bacardi Akuehus) was a children specialty hospital in Ny'nessby, Syrtænzna built between 23 January 2018 and finally finished in 2 February 2019. It collapsed in 20 March 2021 due to the concreate foundations collapsing, instant killing 368 staff and patents within the hospital proper. Additionally the collapsed caused severe to downtown shattering windows and estimated to cause over 16,424 injuries in total including the hospital collapse itself. It was later discovered that asbestos used in the construction of the hospital despite assurances to the local population that it won't be used. Resulting in nearly the whole population of Ny'nessby being infected with Asbestosis.

Retrieved from "https://tep.wiki/w/index.php?title=Saint_Bacardi_Hospital_Collapse&oldid=44844"
Categories:
Cookies help us deliver our services. By using our services, you agree to our use of cookies.