Tortuga (/toɾˈtu.ɡa/), officially known as The Independent Isles of Tortuga (Tortugan creole: Kunsuli Damukidebeli dis Tortuka), is an archipelagic island country in the Packilvanian Ocean, off the coast of Peregrinia. It consists of 199 islands, of which most are clustered around Krubeli Island. Its closest neighbour Justelvard is located 221 kilometres to the east of Sveri Island. Peregrinia, Bai Lung, and the Morstaybishlian territories of the Necraties, Frorkstolm and the Seligeze Islands are also located nearby. Its population of roughly 150,000 is dwarfed by most of its neighbours.

The lack of human presence prior to Salovian rule created a prosperous environment for the ancestors of the Gallegos tortoises to grow in numbers and evolve.

The first human presence was rather brief, only being intermittently and briefly explored by a variety of nations. More permanent settlement began in the 15th century, shortly followed by its annexation into the Grand Republic of Salovia. The majority of slaves brought to the islands were from several Impelanzan-speaking nations in Arcturia, a legacy still observable to this day. It was the site of one of the few successful slave rebellions, making the slaves free men much earlier than most other places in the world. Tortuga gained full independence in 1954.

Today, Tortuga boasts a relatively high GDP per capita due in part to its small population and profitable tourism industry. Its Human Development Index is very high, due to its highly educated population and elevated high life expectancy.

Tortugan culture is a mix of Impelanzan, Salovian and nearby cultures. The vast majority of people living on the islands speak some variation of Impelanzan, but the teaching of Salovian is somewhat controversial due to the history of the nation, and not therefore not universal. The nation is a member of the International Forum and the UNAC.

It was long believed that the Tortugan Isles were devoid of sapient life until the arrival of explorers in later recorded history. We now know this to be untrue. Gallegos tortoises (Chelonoidis) are known to be far beyond the point of sentience. Research has proven that they are sapient creatures, capable of critical thought, language, and forming complex social bonds. Their means of communication are composed of a variety of gestures and noises, making it very different from any other known language. Some markings made by the tortoises have also been interpreted as a written form of this language, but research has remained inconclusive. It is for these reasons that our knowledge of Gallegian history is relatively limited

The lack of structures built by their civilisation can be explained by a lack of any predators on the islands, elimating the need to contruct any forms of shelter and allowing them to flourish. This has also been proposed as a reason for their advancement compared to other animals, being able to expend more time and energy to socialising and thinking.

According to archeological digs, Homesian lifeforms started visiting the archipelago for brief periods of time long before recorded history. The first verifiable account of a visit to the isles is from the journals of a Peregrinian explorer. He, as most after him were, was quite fascinated by the tortoises. Most records state that the tortoises would approach the explorers and were generally quite friendly unless provoked. 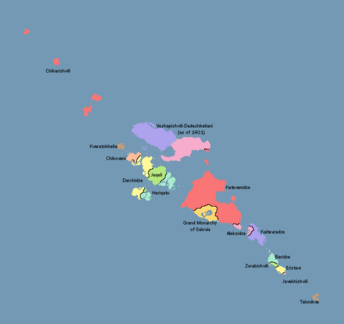 A map of the Tortugan Isles at the end of the Plantation Era (1407). Islands not depicted on this map were either owned by the Benashvili family or undiscovered.

In 1381, Irakli Ketevanidze, a Salovian merchant, came across the Tortugan Isles after being blown off course during a trip to Peregrinia. He explored a small part of Krubeli Island (then Ketevanidze Island) and found an opportunity to grow vast amounts of sugar.

In 1382, he returned to Ketevanidze Island with his family and several Salovian slaves. He brought most of his possessions and permanently relocated to the islands. Several other families followed suit and settled on other islands in the archipelago.

By 1395, the entire archipelago was occupied by some of the wealthiest families in Salovia. The majority of the modern day region of Nublar was the property of the Ketevandize family — making them the most powerful landowners of the time period — but certain areas were owned by other families or factions. Most plantations had grown significantly due to an influx of slaves from Arcturia, most of which were of Impelanzan origin. This trend would persist long after this period, causing drastic demographic shifts. The islands were technically Salovian-speaking, but Impelanzan was spoken more widely. This meeting of two very different languages would begin the formation of Tortugan creole.

An outlier among the families of early Tortuga was the Heriqatu dynasty, which were Cava from the Thrid Kormistazic Empire. They faced discrimination from neighbouring families and could not rely on the empire for protection due to their operation outside of its jurisdiction.

The Grand Monarchy had always shown interest in the archipelago, most notably with the purchase of the land surrounding Tortukepey Bay. By royal decree of King Lerin XVIII, all the islands in the Tortugan archipelago were annexed into the Salovian Empire in 1407. The current families were permitted to continue running their respective territories until further notice. Differing opinions on the future of the islands would eventually see their powers slowly stripped away in favour of more direct Salovian rule.

Colony grows. Family powers get slowly repealed. Benashvili family lasts the longest, end up discovering two new islands but that leads to their demise. Possibly discuss the opinions of leaders on the colony and certain people directly in charge.

Some autonomy given to the colony post-rebellion.