From TEPwiki
(Redirected from Sokala)
Jump to navigation Jump to search

The Democratic Republic of Sokala, commonly called Sokala, is a unitary constitutional semi-presidential republic in Arcturia. Situated in the Arcturian Sea, it consits of 11 islands that are broadly categorized between three geographical divisions from north to south: North Sokala, Central Sokala and South Sokala. The capital city and most populous city of Sokala is Bondoc city. Sokala covers 408,421 km² square kilometres and has an estimated population of 50 million people. While mostly Human, there are several communities of Nekomimis, Elves, Dwarves, and Felines.

In prehistoric times, Islander Native from mainland Arcturia migrated to the islands in search of better resources. Following the arrival of Noramous Belth and his small group of Staynish crewmen, the small group of islands became the trader nation of Meri Laulu. During Meri Laulu's time as a nation, waves of Aurorans and Mainland Arcturians arrived. Exchanges with Durakian, Morst and Staynish nations occurred.

In early 1620, King Lambertus V of the Great Morstaybishlian Empire took interest in Meri Laulu. He began preparations for an invasion of the group islands. By late 1620, the The Morst-Lauluan War ignited and led to Meri Laulu turning to a Morst colony while Tiaro Matagumpay, Meri Laulu's leader at the time, was captured along with the rest of the Meri Lauluan citizens.

After Meri Laulu's defeat, the archipelago became a Morstaybishlian colony. This lead to the proliferation of Staynish culture and language. During this time, Meri Laulu became a hotspot for merchants from Yasteria, Concord, and Gondwana to exchange and trade goods with Morst traders however Meri Laulu's resources were heavily exploited by Morst merchants and government leading to 50% of wildlife to be extinct only after 300 years of occupation.

In the early months of 1920, The Sokalan Rebels, lead by Andrew Matagumpay, revolted and attacked the Morst town of Gamely. News of the rebel attack spread across the Meri Laulu archipelago and inspired other Lauluans to rebel against the Morst Empire. This would lead to nation-wide rebellion, formally called the Sokalan Rebellion, that would lead to their eventual independence in 1926.

The Sokalan Rebels established The Monarchial States of Sokala in 1927. Andrew Matagumpay and his wife, Aiko, would become the nation's first leaders as King and Queen. Sokala would prop a parliamentary system with all 23 provinces that have their own Parliamentary representative. The nation became one of Arcturia's leading exporters of agricultural products; mainly rice, corn, coconuts, and bananas.

From 1928 to 1929, the nation was engulfed with racial tension between Staynish and Islander citizens. In 1930, tensions would finally come to its peak as a gang of Staynnes massacred 37 Islander children and adults in what would be called the Betho Kindergarten Massacre. By late 1930, the three years Staynish-Islander Civil War would spark and lead to the death of 157,000 combatant deaths and 51,000 civilian deaths.

Three years after the end of the civil war, Sokala would unite under the Democratic Republic of Sokala under the leadership of the Sokalan Family. Trade with nations across the globe would be established. Surprisingly, Morstaybishlia would be Sokala's greatest economic partner during its first years as a country.

Before being named Sokala after it's founders Andrew Matagumpay and Marybelle Matagumpay, the nation was named as Meri Laulu. After falling to Morstaybishlian rule, the nation was called as Laulu by the Morst occupiers. After the Sokalan Rebellion, the nation called itself the The Monarchial States of Sokala in 1927. In 1936, Sokala would re-establish itself as the Democratic Republic of Sokala right after the Staynish-Islander Civil War.

The standard way to refer to a citizen of The Democratic Republic of Sokala is as a "Sokalan." 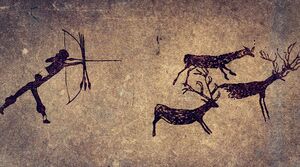 Very little is known where the island natives came from. No record was found of the natives until the early 1600s. Several pieces of evidence have come up in recent years supporting the evidence that the Settlers have been living in the islands for several years. Cave paintings dating back to the 3rd millennium BCE were found in Santa Rosa and Santa Monica. These paintings portrayed several rough drawings of what seems to be ancient Islander natives hunting down deers using spears. Islander native settlements have also been found across the Sokalan archipelago with some even dating back to 4th millennium BCE.

From what can be observed, the early settlers were primarily a hunter-gatherer society. They would tend to live within groups of 5-7 people with most being men. In the 2nd millennium BCE, several Islander tribes begun farming root plants and fruits. This development rapidly pushed most Islanders to live in flat and exposed areas leading to frequent conflicts between Islander tribes. Sharpened bones were used as weapons and tools during what would be called the Age of Buto. In the late 2nd millennium BCE, Islanders regressed back to hunter-gathering due to conflicts leading to most tribes losing most of their men. This event would be called the Age of Despair. Islanders, however, discovered fishing and using fire as a weapon. Preserved charred remains of a man were found in a cave in Hasting's tallest mountain, Jouthunburg.

It is speculated that around the early 1st millennium BCE, settlers started forming tribes with the three biggest tribes forming Meri Laulu, along with Feudalist Diyu, and Kingdom of Durdneel. The Arcturian Islanders begun settlement in the modern-day provinces of Mimaropa, Nada, Davao, San Lorenzo and Santa Monica. The Arcturian Islanders were primarily a fishing society with a matriarchal hierarchy leading the tribes. 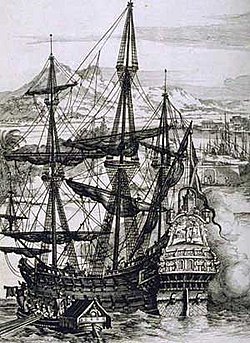 A drawing of the Haligar at a Morst dock

In the early 1600s, Morstaybishlian King Lambertus V sent a ship to establish a colony southward of New Calthia, a colony of the Ethalarian Empire. The ship sent for the mission was the Haligar, a newly constructed galleon, and was lead by Captain Symvlad Arkots. The Haligar was manned by the 100-man crew and brought almost 40 tons of materials needed to build a proper colony. Unfortunately for King Lambertus IV and the Haligar, the Ethalarian Empire acquired information that the Morstaybishlians were vying to start a colony just south of New Calth and viewed it as a possible threat. The Ethalarian Empire, in response, sent a small fleet of Ethalarian ships to intercept the Haligar. 50 miles off the coast of New Calth, Ethalarian ships were finally able to intercept and capture Haligar’s crew, including Captain Arkots. They were given two choices to choose from: Become Ethalarian prisoners or be dropped off on an island. While most of the crew were thinking of what to choose, Captain Arkots managed to escape his bonds and attacked the Ethalarian soldiers. This inspired other crew members to escape their bonds and attack while others took over rowboats and escaped. After 30 minutes of chaotic brawls, the dust settled, it was revealed that Captain Arkots, along with 63 crewmen, managed to kill 20 Ethalarian marines before dying during the brawl while the rest fled in rowboats. The Ethalarians decided to let the escapees go and returned to New Calth. News of the Haligar’s demise would soon reach King Lambertus V and would start what would be the Battle for Luxaria.

After 5 days at sea, Deckhand Noramus Belth and the other 37 survivors of Haligar finally found an island that was suitable to take shelter in. With the little supplies and armament, they managed to bring, they established what they thought would be a temporary settlement.

Three weeks after establishing a settlement, Belth decided to explore the nearby islands for more resources. On the first island, Belth and his men found several abandoned huts constructed from coconut lumber and corn leaves. After several hours of exploring, Belth decided to explore the next island. Before reaching the next island, Belth encountered several of what looked like islander natives. The deckhand, leading his men, tried to communicate with the natives. Instead of responding with words, he was met with various kinds of objects being thrown at him, causing him and his men to hastily row away to their settlement. Deciding that the natives would soon attack them, Belth prepared for what he thought would be their demise. Three days later, to Belth’s surprise, several dozen native fishing boats came, and instead of attacking them offered them food, clothing, and even building materials. This marked the start of the strong bond between Belth’s group and the natives.

The following months would lead to the unification of various tribes of Arcturian Islanders. By the end of the month, a total of 100 tribes have congregated and decided to merge with the growing nation. The nation would be unofficially called Meri Laulu or 'united flowers' in old Arcturian Islander. The fledgling nation began establishing settlements across the southern portion of the archipelago with most settlements being built on the coast. These settlements were later spotted by Morstaybishlian merchants who then opened trade with the natives. Soon, news of the new nation spread across Aurora and the other continents.

Situated below colonies of colonies of the Ethalrian Empire, Caltharus, Staynnes, and Salovia; Meri Laulu bloomed economically with traders flowing in from nearby Arcturian and Auroran nations. Seibhu, Meri Laulu's largest settlement, bloomed with its docks constantly bustling with ships. Seibhu served as the dropoff point of cargo from merchants coming from Southern Arcturia. These cargos were usually goods that were to be sold to nearby nations like Diyu and Durdneel.

The Morststaybishlian Empire would rule over Meri Laulu and the other nations for 200 years. During that time, Meri Lauluans were used by the Morsts for physical labor. They would be sent with expeditionary ships as physical laborers as most Lauluans were very skilled in carpentry and masonry. In 1689, 178 Lauluans would be sent to help Captain Kerden establish what would soon be called Queensport. For the following years, Lauluans would total up to 25% of Queensport’s population as more and more Lauluans were sent to build up the settlement and help construct a military naval port and other important buildings.

In 1694, Caven forces attacked the Staynish port during which all the Lauluan laborers were conscripted and were forced to fight off the Caven soldiers. Unfortunately, Caven soldiers were more superior in numbers and equipment and slaughtered the Queensport population. Queensport would later be declared a Caven trading port.

After receiving news of the Queensport’s defeat, Commodore Kerden, previously Captain, would be sent along with 2000 Morst soldiers and 800 conscripted Meri Lauluans. In a very short battle, Queensport would be retaken by Morst forces with very few casualties while most Caven soldiers died with only one Caven ship managing to escape.

After the Great War, the discontent of the Lauluans continues to grow because Lauluans were conscripted to fight for Morstaybishlia during the Great War which leads to the death of 5,000 Meri Lauluans. Several Lauluans started planning rebellions. One of them was Tiaro Matagumpay’s 5th generation relative, Andrew Matagumpay. Andrew Matagumpay, along with his wife, founded the Meri Lauluan Rebellion Corps. In January 1920, The Meri Lauluan Rebellion Corps, using a mix of stolen and smuggled guns, attacked and captured the town of Gamely. The attack on Gamely inspired other Lauluans to rebel. By February, 13 provinces would be secured by the MLRC. Summer would bring less success for the MLRC as Morstaybishlia had sent several thousand of its Imperial Armed Forces to quell the rebellion.